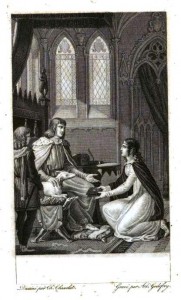 With Marie de France, a leading figure in the Renaissance of the twelfth century, medieval literature moves decisively from the heroic to the romantic. The headnote’s reference to romances as “novelistic narratives’ is a good point from which to start a discussion of the lai, the genre with which Marie is primarily identified. Much briefer than the romance, lais are distinguished by their intensity, their use of symbols, and their frequent appeal to the supernatural. Although the narratives are pared down, by invoking the symbolic and the supernatural they offer surprisingly acute insights into motive and personality. In their penetration of her human actors and the scenes that surround them, Marie’s lais do indeed prefigure the novel as we know it today.

Without saying so explicitly, in Lanval Marie undercuts the Arthurian court by emphasizing the good manners of Lanval, which put to shame the unexplained neglect that he suffers at the hands of knights who are supposed to have perfected good behavior. In LaÃ¼stic, her keen eye for the physical circumstances in which her characters live allows for a different critique of manners and the way they express the truth of human nature. 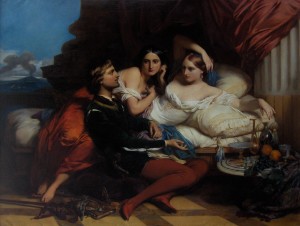 “Boccaccio reading from the Decameron to Queen Johanna of Naples”, by Gustaf Wappers (1803—1874), Royal Museums of Fine Arts, Brussels, Belgium

Boccaccio’s introduction is the counterpart, with some differences, of Chaucer’s General Prologue. Each provides the setting for a long sequence of tales. There is a measure of chance or coincidence in both groups of storytellers. Boccaccio’s seven young ladies, happening to meet in a church (though they are already friends or acquaintances), decide to leave plague-ridden Florence and live with more safety on their country estates; they invite three young gentlemen, also well known to them, to share their plans. Chaucer’s twenty-nine pilgrims–traveling alone or in twos or threes or even more–all happen to have come for a night’s lodging to an inn or tavern in Southwark, across the Thames from London, on the route to Canterbury. Boccaccio’s company decide to spend part of each day in telling stories and agree that on the first day each of the ten is to tell a tale on a topic of his or her own choosing. In Chaucer’s account the innkeeper takes charge of proceedings; he plans four tales to be told by each traveler; the order is to be determined by lot, and he says the Knight is due to tell the first tale.

Chaucer has no real equivalent of Boccaccio’s extended and vivid account of the plague in Florence. Boccaccio knew the Italian plague of 1348 from his own experience. His description of the mode of life of the company of young folk in the country, though idealized, is perhaps not too far from actuality. The physical comforts, the apparent abundance of food and other necessities, the ease with which the people move from place to place, all these reflect what was possible or even usual among the wealthy class of Italians in the fourteenth century. They also have the pleasing manners of gentlefolk; they treat one another with courtesy and consideration–from which good-natured jest and humor are not excluded. It may seem idyllic to us, but it was probably nonetheless realistic.