Click on the below pic for a video in which scholars discuss The Thousand and One Nights: 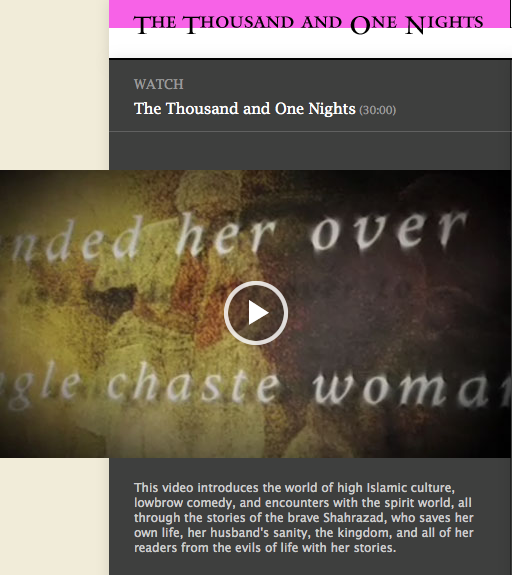 Norton Backgrounds: The Thousand and One Nights

The theme of justice or the relation of crime to punishment is a central one in this portion of the Nights. The young women whom Shahrayar married and murders are innocent of any crime against Shahrayar whatsoever, and by punishing the innocent Shahrayar changes himself from a just ruler into a monster of indifference, a ruler who makes war on his own people. The merchant is equally innocent of evil intent toward the jinn or his son. There is, to our eyes at least, an absurd or comical element to this encounter that undermines any inclination to sympathize with the jinn in his loss. As pointed out in the headnote, the tales the three travelers tell offer further variations on this theme; moreover, they provide very attractive examples of women who are virtuous and obedient to their fathers or husbands–the herdsman’s daughter, the merchant’s magical wife, and the butcher’s daughter.

The most provocative questions raised by the Prologue are those of the morality of women and racial discrimination. All too often the story is read through Shahrayar’s eyes, and he, his brother, and the demon are seen simply as victims of evil and designing women. The key to a reading that does more justice to the woman’s point of view is in the relation of the demon to his captured bride. He is the villain here, not the young woman whom he has stolen away from her husband and home on her wedding night and kept imprisoned at the bottom of the sea solely for his own pleasure. That Shahrayar and Shahzaman don’t see this suggests that they are insensitive husbands although they may be just rulers. Shahrayar’s assault on the young women of the realm is the height of insanity since by it he, the king, is making warfare on his own people. It suggests that he is angry with them, not just the young women, perhaps because he feels they have shared in his wife’s secret and not told him. After all, such astonishing performances, which involved so many of the palace staff, can hardly have been a secret to anybody in the palace but Shahrayar.

The selection of black partners for Shahrayar’s queen and her attendants may reflect Muslim stereotypes about black male potency, but it is not necessarily invidious for that reason. Islam was not completely color blind, but there have been eminent and distinguished Muslims of African origin in every profession since the time of Muhammad. The demon who is the most powerful figure in the story, and whose misfortune is seen by Shahrayar and Shahzaman as greater than their own, is also black.

Here is an illustration of Dante’s Hell.

There are two important incidents in Dante’s life which helped shaped the Divine Comedy.

1. At the age of nine, approximately a year after his mother died, Dante saw Beatrice. In the Vita Nuova, he recounts the meeting:

She appeared dressed in the most patrician of colors, a subdued and decorous crimson, her robe bound round and adorned in a style suitable to her years. At that very moment, and I speak the truth, the vital spirit, the one that dwells in the most secret chamber of the heart, began to tremble so violently that even the most minute veins of my body were strangely effected; and trembling, it spoke these words: Ecce dues fortior, qui veniens dominabitur michi (“Here is a god stronger than I who comes to rule over me.”) At that point the animal spirit, the one abiding in the high chamber to which all the senses bring their perceptions, was stricken with amazement and, speaking directly to the spirits of sight said these words: Apparuit iam beatitudo vestra (“Now your bliss has appeared”). At that point the natural spirit, the one dwelling in that part where our food is digested, began to weep, and weeping said these words: Heu miser, quia freqenter impeditus ero deinceps! (Oh, wretched me! for I shall be suffer often from now on).”

For more information on the  Vita Nuova, watch the following video from Yale professor and Dante scholar Giuseppe Mazzotta:

2. At 37, while on embassy to the pope, Dante was banished from his native and beloved Florence, and therefore from his family, which did not include Beatrice, and from his work, and from his church. The opposing political party would kill him of he returned. Beatrice, by this time, had passed away.

From his outcast and anguish, Dante fashioned The Comedy. The ‘Divine’ of the title was not given by Dante, but added later by its readers. Comedy is a word derived from comos “a village” and from oda “a song” so that the Comedy is so to speak “a rustic song.” This title reflects that language of the Comedy: Italian. Latin was the language of scholars and of scripture in Dante’s age. So his choosing of Latin, the vernacular, was itself a Christian Ideal: that all people could read his text and understand how he struggled toward personal salvation.

The Divine Comedy is made up of three canticle: Inferno, Purgatorio, Paradisio. There are one hundred cantos total in the Divine Comedy: 34 in the Inferno (the first being a prologue), and 33 in the Purgatorio and in the Paradisio. Each canto is written in terza rima, a   scheme of invented by Dante rhyming thusly: aba bcb cdc, etc.