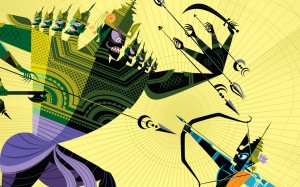 In his book The Uses of Enchantment: The Meaning and Importance of Fairy Tales Bruno Bettelheim wrties:

In the Hindu civilization, the story of Rama and Sita, which tells of their peaceable courage and their passionate devotion to each other, is the prototype of love and marriage relationships. The culture, moreover, enjoins everyone to try to relive this myth in his or her own life; every Hindu bride is called Sita, and as part of her wedding ceremony she acts out certain episodes of the myth. (25)

The Ramayaa has enchanted generations of Indians, and this ancient epic continues to fascinate modern readers. Through the centuries it has been retold in the major languages of India and Southeast Asia and has been interpreted through theater, dance, and other performance traditions. ValmÄ±ki’s telling, written in Sanskrit, is the oldest extant version of the Rama story. In ValmÄ±ki’s account, King Dasaratha proclaims his son Rama, son of the senior Queen Kausalya, heir apparent. The jealous Queen KaikeyÄ±, wishing her own son to rule Ayodhya, demands that Rama be exiled to the forest for fourteen years. Dasaratha is forced to comply because, KaikeyÄ± reminds him, he once vowed to grant her two favors of her choosing. Out of a sense of filial duty, the noble Rama unflinchingly accepts his exile. His faithful wife Sita and brother Laksmana accompany him to the forest, where they undergo many sufferings and adventures. Disaster strikes when Ravana, the evil demon-king of Lanka (Sri Lanka), abducts SÄ±ta. Rama and Laksmana travel the length of India in search of SÄ±ta. With the help of the monkey chief, SugrÄ±va, his hordes, and above all, the brave and loyal monkey Hanuman, they eventually locate the princess on the island of Lanka, where Ravana keeps her prisoner. Rama and the monkey armies kill Ravana and his demon armies in combat, and SÄ±ta is freed. The triumphant prince returns with his wife to reclaim his throne in Ayodhya. In the last book of the Ramayana, not included in the anthology, ValmÄ±ki describes his own role as poet-bard in recording the heroic life of Rama and concludes the epic with a narrative of the events that followed Rama’s coronation: SÄ±ta’s exile, her withdrawal (after she has restored Rama’s twin sons to their father) to the arms of her mother, the goddess Earth, and the last days of Rama. Book 2, the Book of Ayodhya, presents the most dramatic portion of the Rama story, the events surrounding Rama’s banishment. 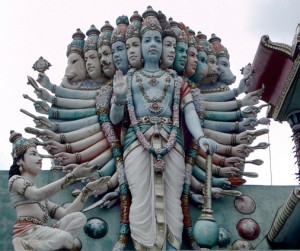 A central philosophical text in Hinduism, the Bhagavad-GÄ±ta is placed in the unlikeliest of settings: in the sixth book of India’s war epic, the Mahabharata, on the battlefield of Kuruksetra, on the eve of a great war destined to nearly wipe out the clans of North India. This intriguing and celebrated setting–in connection to the great epic and its beloved characters, and especially the very human dilemma of its hero–partly accounts for the poem’s enduring appeal to Indian readers. The Bhagavad-GÄ±ta addresses the central questions of the Hindu religious tradition: What is dharma (the sacred Law of the cosmos and the social order)? How can the individual learn his/her own dharma and act according to it? Since dharma in the Hindu tradition is strictly defined by a person’s gender, class, caste, occupation, and position in the orders of family, society, and state, will not diverse dharmas inevitably clash? Do not some aspects of one’s own dharma (sacred duty) enmesh one in manifestly evil acts (evil karma), such as hurting or killing others? And since evil karma inevitably leads to existential suffering, and entails rebirth, how is a person to es- cape these consequences and attain moksa (liberation from karma)–the ultimate goal of the Hindu? Is one’s dharma strictly determined, or does one have a choice in action?

But the GÄ±ta does not put these questions in this abstract fashion. The problem is made concrete in the dilemma that the Pandava hero Arjuna faces on the battlefield: how can it be in accordance with dharma to kill his own kinsmen in battle, even though these cousins and their allies had cheated the Pandava princes out of the kingdom that is rightfully theirs? Put simply, Arjuna wonders whether following his sacred duty as a warrior, that is, to kill his enemies, is not in this case fraught with evil karma, since he must in the process kill his elders and kinsmen, to whom he owes filial allegiance. Given the situation, what hope has he of moksa?

In the Mahabharata war, Krishna, who is God incarnate and an ally of the Pandava, has taken the role of Arjuna’s charioteer and has driven him to the battlefield (note the symbolism of guidance). When Arjuna refuses to fight (the first teaching), Krishna begins to explain the subtle, complex nature of dharma to him. He tells Arjuna about the relationship between the individual and cosmic order (the second teaching). He explains that action is necessary for the proper functioning of the cosmos, and that the caste system and the ordering of the sacred duties of individuals are a part of this cosmic plan (the third teaching). Although one does not have complete freedom of choice in what actions to perform, one’s attitude toward action is entirely under one’s control. Arjuna must fight, because it is his duty as a warrior, and because he must stand by his brothers; however, he must fight in the right spirit. Desire and anger motivate evil attitudes and evil acts; therefore a man must first restrain his senses (lines 41—43). In the sixth teaching Krishna gives Arjuna practical advice about the physical and meditational discipline (yoga) that will help a person to accomplish self-control. God’s role in all this is also explained in the sixth teaching, as is the relation between God (the infinite Spirit) and human beings. Krishna’s progressive arguments culminate in his epiphanic self-revelation to Arjuna, who is awed by God’s grandeur (the eleventh teaching). The remainder of the Bhagavad-GÄ±ta’s eighteen chapters are elaborations of these central arguments.

The complexity of the existential dilemma confronted by Arjuna (and by extension all Hindus) demands a complex yet progressive resolution. The technique of dialogue between a spiritual teacher (guru) and student (sisya) is an ancient form of discourse in Indian religions, found in the older Upanisads and in Buddhist texts. The self-discipline of yoga, too, is a standard spiritual practice in India. The linking of body and mind in achieving a personal religious goal, so clearly manifested in the Bhagavad- GÄ±ta’s argument, shows that in India the problem of achieving the ultimate religious goal is treated not as an abstract philosophical problem but as a matter of everyday life and practice. The Bhagavad-GÄ±ta’s popularity is due largely to its practical orientation, and its ability to reconcile universal human values with the individual’s situation in caste and other orders of the Hindu world. Since Indian epic heroes are also exemplars in ethics and spiritual achievement, the warrior hero becomes an apt symbol of everyman. The Bhagavad-GÄ±ta holds special power for Indian readers, who respond deeply to Arjuna’s dilemma of divided loyalties within a large, extended family.