You should gain a critical understanding of the texts. 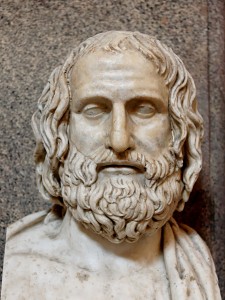 Medea repeatedly refers to Jason as her husband (lines 227, 254, 259, 260, etc.) and herself as his wife (line 580), and Jason calls himself her husband (line 1312) and says she was married to him (line 1311). Yet he can abandon her and marry the princess of Corinth; though Medea protests passionately, Kreon and the princess find nothing objectionable in Jason’s conduct, and there is apparently no violation of law on his part.

For the Athenian audience this would not have been seen as a contradiction; it was perfectly understandable as a reflection of conditions in their own society. At the time the play was produced, an Athenian citizen’s sons could be recognized as citizens themselves only if born of an Athenian mother; “marriage’ was a contract entered into by two Athenian families, the bride brought her husband a dowry (which had to be restored if he separated from her), and the purpose of marriage was officially defined as “the procreation of legitimate children.’ A marriage with a foreign woman was not a marriage in this sense at all; many Athenian men had, in addition to their legitimate wives, concubines who might well be of foreign birth and had no rights. What sort of a marriage ceremony Medea and Jason went through we are not told, but in the eyes of Athenian law it was not binding. Medea can call Jason to witness “the gods whose names you swore by’ and “my right hand, and the knees which you often clasped / In supplication’ (lines 481—85), but though it is true that he has broken his word, she has no legal hold on him.

Medea has no legal recourse; she has to fall back on cunning and violence. 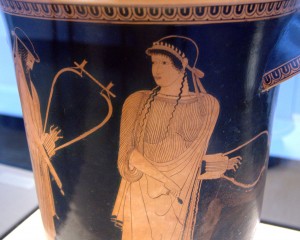 Sappho on an Attic red-figure vase by the Brygos Painter, ca. 470 BC.

In some ancient texts Sappho is referred to as a teacher, and the girls whose names recur so often in her poems are said to be her pupils; a papyrus fragment published in 1974 (it was written in the late second century C.E.) speaks of her as “teaching in peace and quiet the noble girls not only from the local families but also from families in Ionia.’ A fragment of one of her poems, addressed, we are told by the writer who quotes it, to an “uneducated woman,’ begins with the words “But when you die, you will lie there in the grave and no one will remember you afterwards or long for you.’ The context of her poetry may have been a more or less formal circle of aristocratic girls whose same-sex bonding and instruction in music and dance prepared them for marriage.

Many of Sappho’s poems were epithalamia, marriage songs, composed presumably for her favorite pupils; others were heartbroken laments for the loss of a loved companion. “I simply want to be dead,’ runs one fragment. “Weeping she left me / with many tears and said this: / Oh how badly things have turned out for us. / Sappho, I swear, against my will I leave you. / And I answered her: Rejoice, go and / remember me. For you know how we cherished you.’ And the second poem included in the anthology expresses a passionate reaction to the imagined sight of a beloved girl in conversation with a man. But Sappho’s poetry is not always so tensely passionate; she can also treat the pangs of unrequited love with an ironic wit. The first poem in the anthology, for example, Sappho’s invocation of the love goddess Aphrodite, starts out as a conventional appeal to a deity to come to the suppliant’s help. It employs the usual formulas– “but come here if ever before / you caught my voice’–but then it departs sharply from the established pattern. Instead of dealing with the present occasion, Sappho’s need for help, it gives a vivid account of the goddess’s previous visit. And we are told what Sappho’s “hard care’ is all about: she has been crossed in love, someone is rejecting her suit. On that previous occasion Aphrodite was gracious and promised her aid; Sappho now asks for the same promise: “all my heart longs / to accomplish, accomplish. You / be my ally.’ The Greek for the final phrase means literally: “be my ally in battle.’

The poem is a brilliant example of self-mocking wit. The whole religious terminology of a hymn, the appeal to a god, including the epiphany of the goddess concerned, is put in motion so that Sappho can win the heart of a recalcitrant girl, and furthermore, the poem shows us that this is not the first time Sappho has brought the goddess down from Olympus.

This ironic tone is, however, an exception; elsewhere Sappho is well aware of the awesome and terrifying powers of the goddess. One fragment speaks of the dramatic effects of desire upon the body: “tongue breaks and thin / fire is racing under skin / and in eyes no sight and drumming / fills ears / and cold sweat holds me and shaking / grips me all,’ and another speaks of love that shakes the heart “like a mountain wind falling on oak trees.’ 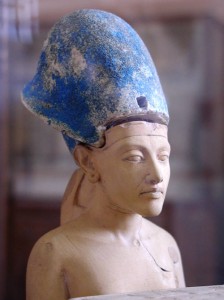 The romantic lyrics are the most fun to read, and they anticipate some of the themes and techniques found in Sappho. The Leiden Hymns and Akhenaten’s “Hymn to the Sun’ offer two different approaches to giving poetic expression to the concept of divinity. The first is more static, a catalog of the attributes of the great god Amun-Re that make him all gods in one. The second is more dynamic. It focuses on the sun, follows his diurnal progress across the heavens, and evokes the effect of his life-giving rays on earth below. It also glorifies the role of the pharaoh as the son and interpreter of the god. Both offer models for, or early exemplars of, virtually universal strategies for celebrating royal or divine power and glory. 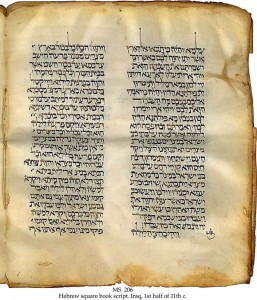 11th century manuscript of the Hebrew Bible with Aramaic Targum

The Creation of the world in seven days: light and darkness on the first day; the sky (firmament) on the second; on the third, land and sea and also vegetation on the land; on the fourth, sun, moon, and stars; on the fifth, fish and birds; on the sixth, animals and man (Adam). On the seventh day God rested. Adam, in the garden of Eden, is given permission to eat the fruit of any tree except the tree of knowledge of good and evil. He is also given a mate, Eve, who, tempted by the serpent, persuades Adam to eat the forbidden fruit. They are punished by expulsion from the garden and must now work to live; they must also face the inevitability of death: “for dust you are and to dust you shall return.’

In the next generation, violent death comes into the world: Cain murders his brother Abel. Their descendants become so wicked that God is sorry he ever created the human race and decides to destroy it. But one just man, Noah, is allowed to survive the Flood, with his family and specimens of all the animals, fish, and birds. So the Earth is repopulated, but humans, in their pride, begin to build a tower as high as Heaven. God prevents this by confusing their speech; before, there was one universal language, but now the builders of the tower speak different languages and cannot understand one another.

Though Genesis is traditionally assigned to the prophet Moses, it bears the marks of a document that has a long history of revision, addition, and reinterpretation over a period of time. (There are, for example, two different accounts of the Creation that do not agree in detail.) The book probably preserves ancient oral tradition but shows signs also of priestly revision at a later stage.

Satan–the Hebrew word means “the adversary’–challenges God to test the piety of Job, a rich and fortunate man famous for his devotion to the Almighty. How will his piety stand up in the face of calamity? God gives Satan permission to inflict any suffering short of physical harm on Job to see if, as Satan claims, he will curse God.

In the course of one day Job learns that all his servants, his flocks, and his sons and daughters have been killed, but he does not blame God. Satan demands and receives permission to inflict bodily harm; he covers Job’s body with sores. Job’s wife tells him, “Curse God and die,’ but he rebukes her.

Now three friends (Job’s comforters) come to sympathize with him. From this point on the story is cast in dramatic and poetic form until the short narrative conclusion.

Job wishes he had not been born, and the first of his friends replies: since Job has been punished, he must have sinned. Job’s attitude is arrogant; he should show humility before God. The second friend suggests he may be paying for the sins of his children. The third returns to the theme of the first but more harshly: Job must be guilty or he would not be suffering. Job refuses to accept these arguments; the disasters inflicted on him are out of proportion to any sin he may unknowingly have commit- ted. He appeals to God and wishes he could speak to him directly and learn the reason for his suffering: “Here is my desire: that Shaddai answer me’ (chapter 31). His desire is fulfilled as God speaks from the whirlwind. His speech contains no justification for the suffering he inflicted on Job; it is a magnificent celebration of the power and greatness of God. Job accepts God’s answer; he feels overwhelmed by God’s personal intervention–now he has faith in him: “I knew you, but only by rumor; my eye has beheld you today’ (42). God does not answer Job’s question, but he does dismiss the beliefs of his friends: “you have not spoken rightly about me as did my servant Job’ (42). And “Yahweh restored Job’s fortunes . . . doubling everything Job had’ (42).

The basis of the work is an oral folktale, the story of the patient sufferer. Onto a Hebrew version of the tale has been grafted a poetic dialogue between Job and three friends and also the voice of God speaking from the whirlwind. The text probably was set in its present form some time in the sixth century B.C.E.