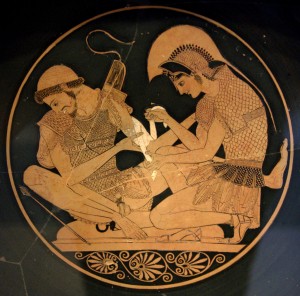 As our Norton Anthology mentions on page 161, Homer’s epics were not only a sort-of of mirror in which Ancient Greek culture could look into in order to see its values reflected and affirmed, but also the very means by which these values were taught to children. When a bard recited the epic, adults would be reminded while the children would be instructed. As Bruno Bettelheim wrties in The Uses of Enchantment: The Meaning and Importance of Fairy Tales:

Myths and closely related religious legends offered material from which children formed their concepts of the world’s origin and purpose, and of the social ideals a child could pattern himself after. These were the images of the unconquered hero Achilles and wily Odysseus; of Hercules, whose life history showed that it is not beneath the dignity of the strongest man to clean the filthiest stable; of St. Martin, who cut his coat in half to clothe a poor beggar. (24)

A warrior in Ancient Greece competes for two things.

1. Victory: The warrior competes with his enemy on the battlefield for victory.

2. Honor: The warrior competes with his peers with intense rivalry to get the spoils of war–which are symbols of his honor. This value leads to a weak sense of group loyalty and helps us understand Achilles’s prayer to his mother in lines 418-425:

See if he is willing to help the Trojans

Hem the Greeks in between the fleet and the sea.

Once they start being killed, the Greeks may

Appreciate Agamemnon for what he is,

And the wide-ruling son of Atreus [Agamemnon] will see

What a fool he’s been because he did not honor

The best of all the fighting Achaeans [Achilles]. (185)

He is praying for the success of the enemy so he may retrieve his honor, stolen from him by Agamemnon when he took Briseus. This is the beginning of disorder in the Iliad, a disorder that reaches its pinnacle when Achilles does not honor Hector’s dead body as a true warrior should, but drags him behind his chariot in retaliation for the death of Patroclus.

The order is regained when Achilles’s prayer is reversed. The prayer in Book 1, quoted above, takes the following route: Achilles â†’ Thetis â†’ Zeus. However, in Book 24, on the top of page 258, beginning at line 177, the request for Achilles to acquiesce Hector’s body to Priam takes the opposite route, reestablishing order: Zues â†’ Thetis â†’ Achilles. The movement from violation to restoration of order leaves Achilles and Priam with a more explicit understanding of the values of their society.

The Iliad also complicates the idea that war is a simple battle between two opposing forces. Instead of a simple us against them mindset, the text shows the layering and complications of war:

3. Achaeans -vs- Achaeans: Agamemnon -vs- Achilles.

5. Trojans -vs- Trojans: Hector -vs- Paris, who escapes battle with the help of a goddess.

6. Gods -vs- Trojans: Athena -vs- Hector: Book 22 Athena pretends to be Deiphobus and tricks Hector into feeling courage against Achilles in their final battle, p.248.

7. Achaeans -vs- Gods: Diomedes in Book 5, not in our text, wounds both Ares and Aphrodite.

And what can we say about all the physical violence in The Iliad? According to scholar Bernard Knox:

The Iliad accepts violence as a permanent factor in human life and accepts it without sentimentality, for it is just as sentimental to pretend that war does not have its monstrous ugliness as it is to deny that it has its own strange power and beauty, a power, which can call out in men resources of endurance, courage and self-sacrifice that peacetime, to our sorrow and loss, can rarely command. Three thousand years have not changed the human condition in this respect; we are still lovers and victims of the will to violence, and so long as we are, Homer will be read as its truest interpreter.