You should memorize the Four Functions of Mythology; they explain the individual and cultural purposes of many of the texts we will be reading for this course, and you will be required to reveal the ways in which a story adheres to or challenges these functions. You should gain a critical understanding of Gilgamesh, and how it expresses a culture’s heroic ideals. 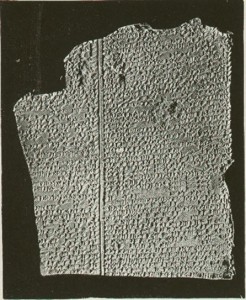 The Deluge tablet of the Gilgamesh epic in Akkadian

The audio recording uses the same translation, but in a slightly abridged version.

If you want to learn how to interpret and understand the deeper meanings of a story, then you may begin by paying close attention to two things:

Let me give an illustration. Once, on a midterm, I asked students to read “The Ungrateful Son’ from Grimm’s Complete Fairy Tales–posted below–and required them to give an allegorical reading of the story:

A man and his wife were once sitting by the door of their house, and they had a roasted chicken set before them, and were about to eat it together. Then the man saw that his aged father was coming, and hastily took the chicken and hid it, for he would not permit him to have any of it. The old man came, took a drink, and went away. The son wanted to put the roasted chicken on the table again, but when he took it up, it had become a great toad, which jumped into his face and sat there and never went away again, and if anyone wanted to take it off, it looked venomously at him as if it would jump in his face, so that no one would venture to touch it. And the ungrateful son was forced to feed the toad everyday, or else it fed itself on his face; and thus he went about the world without knowing rest. (363)

One of my favorite answers from a student was comprised of a single sentence: ‘The toad is his greed.’ The toad, being the supernatural element, begs for interpretation, and that is what the student did. Moreover, though there are better or worse interpretations, they certainly do, and should, differ. One student may not use the word greed, or another may see it completely different, but we must be sure to never impose ideas onto to the story what there is no evidence for in the text itself.

For help on distinguishing between literal and allegorical interpretations of a text, let us hear from one of our authors: Dante Alighieri who wrote the following outline:

1. Literal: (contained in the letter) When reading a work of History in the literal sense, we are to assume the text reflects Historical Truth. But what about a work of fiction? Dante claims works of fiction are Bella Menzogna, literally Beautiful Lies. That is, they are not be taken literally so much as figuratively, or, as in the second sense, allegorically. If one reads the Hebrew Bible literally then one may object to Darwinism. If, on the other hand, one reads the Hebrew Bible allegorically then one can accept both Darwinism and the Hebrew Bible without conflict.

2. Allegorical: (signified by the letter) In a work of fiction, the allegory is the hidden truth. Dante uses the example of Orpheus who, with his lyre, tamed wild beasts and made trees and rocks move towards him. So what is the allegory of the tale of Orpheus? Dante claims it is: The wise man, with his instrument of his voice, makes cruel hearts grow tender and humble, and moves towards his will those who do not devote their lives to knowledge; and those who have no rational life whatsoever are almost like stones.

William Moran claims in his article “The Gilgamesh Epic: A Masterpiece from Ancient Mesopotamia” that the story is a Bildungsroman. A Bildungsroman is “a story that recounts the development of an individual from childhood to maturity, to the point at which the main character recognizes his or her place and role in the world.” In other words, a coming-of-age story. In the beginning, Gilgamesh misbehaves, he can’t control himself, and his lusts spill over into raping women on their wedding night, and bullying the men of Uruk. Like an undisciplined child, he drives everyone around him to exhaustion. But how does he come of age? That question is answered by explaining the three transformations.

The first transformation is not Gilgamesh’s; it is Enkidu’s, but it is required for Gilgamesh to undergo his own transformation. In this way, Enkidu is a hero, his death and self-sacrifice vitalize the life of Gilgamesh who in turns vitalizes Uruk. At first Enkidu is a wild thing, uncivilized; but by means of the temple harlot, Shamhat–allegorically a Mother Figure–he undergoes his first transformation, from a beast into a man: Nonhuman  â†’ Human. By sexing Enkidu, bathing him, anointing him, and feeding him cooked food (bread and beer!), the harlot introduces him to human civilization which depends for its continuation upon sex for offspring, and on cleanliness of its citizens and on the cooking of food for the prevention of disease. Having awakened Enkidu to what is human, he hears of Gilgamesh’s misbehaving–which is his call to adventure–and he accepts it and goes to Uruk. And yes, he prevents GIlgamesh from entering the married woman’s house and raping her and therefore has performed a heroic act: he has put himself in danger to help others.

Enkidu matches Gilgamesh in his dynamism, and the boys go romping around like two thugs, killing monsters–Humbaba–and they get a bit too cocky. Gilgamesh insults Ishtar, the goddess of his city, and the boys slay the Bull of Heaven. Things have gotten out of hand. As a result, the Gods bring balance by causing Enkidu’s death. Gilgamesh’s best-friend is gone; he watches the worm drop from his nose. Then, the second transformation, Human  â†’ Nonhuman, is undergone by Gilgamesh. He becomes what Enkidu was: he refuses to wash, to cut his hair, to put on fresh clothes; he rejects civilization, leaving society behind, also rejecting his former heroic ideal of leaving behind a name that lasts forever. The mystery of death begins to eat at him. The journey of Enkidu has ended and the journey of Gilgamesh has begun.

Gilgamesh goes on a great journey, obsessed and willing to sacrifice everything to find Utnapishtim. Ask yourself: Is he running to eternal life, or away from death? Going through the sun’s tunnel–or, allegorically, the underworld–he comes out on the other side into paradise. He is presented with the basic trial of staying awake, but cannot, and he grudgingly begins to accept his failings. He bathes and casts off his cloak, and by an act of simple human folly, loses the plant of everlasting life to the serpent. And, finally, we get the statement that, for me, spells out the final transformation from Nonhuman  â†’ Human, and exemplifies a mature attitude which accepts physical limitations: On page 81, after losing the plant, he says–and I can hear him laugh when he says this–

I have done a good deed for the reptile!

Gilgamesh now returns to Uruk and scribes his story onto his temple’s walls. Whereas in the beginning of the story he was guided by the pleasure principle, aimed only at satiating his own desire to dominate men with violence and women with sex, he is now guided by the reality principle, which states: you can’t always get what you want. The act of writing his story affirms this: he knows that he has changed and wants it written down as a human record, and as a guide, or an example, for others who undergo similar transformations. The diagram below illustrates his journey: 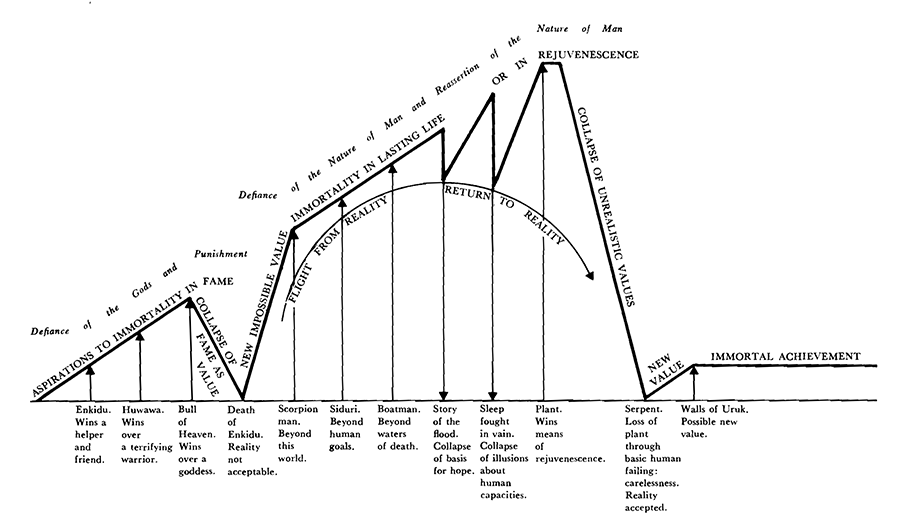 As noted, there is a significance to the bread and beer the harlot gives to Enkidu. Burkhard Bilger, in his essay “Nature’s Spoils,” which originally appeared in the The New Yorker, writes:

Fermentation, like cooking with fire, is one of the initial conditions of civilization. The alcohol and acids it produces can preserve fruits and grains for months and even years, making sedentary society possible. The first ferments happened by accident–honey water turned to mead, grapes to vinegar–but people soon learned to re-create them. By 5400 B. C. the ancient Iranians were making wine. By 1800 B. C. the Sumerians were worshiping Ninkasi, the goddess of beer. By the first century B. C., the Chinese were making a precursor to soy sauce.

With jugs of hand-sanitizer screwed to nearly every wall in our public buildings, one might assume that bacteria, increased in the fermentation process, is some kind of enemy of us humans. On the contrary, Bilger’s essay also notes:

Modern hygiene has prevented countless colds, fevers, and other ailments, but its central premise is hopelessly outdated. The human body isn’t besieged; it’s saturated, infused, with microbial life at every level. “There is not such thing as an individual,” Lynn Margulis, a biologist at the University of Massachusetts at Amherst, told me recently. “What we see as animals are partly just integrated sets of bacteria.” Nearly all the DNA in our bodies belongs to microorganisms: they outnumber our own cells nine to one. They process the nutrients in our guts, produce the chemicals that trigger sleep, ferment the sweat on our skin and the glucose in our muscles. (“Humans didn’t invent fermentation,” Katz likes to say. “Fermentation created us.”) They work with the immune system to mediate chemical reactions and drive out the most common infections. Even our own cells are kept alive by mitochondria–the tiny microbial engines in their cytoplasm. Bacteria are us.

Considering the evidence above, Enkidu’s introduction to fermented foods may have been more than a symbolic offering: the bread he ate and beer he drank may have provided his body with certain bacteria that helped him survive–at least until the gods killed him.