You should gain a critical understanding of The Hero’s Journey as outlined by Joseph Campbell. This basic idea will help you see not only the connections but also the dissimilarities between our readings. By imagining each story’s hero at the top of the below diagram’s circle, and following him or her in a circular movement as the narrative continues and the hero encounters difficulties and challenges, this basic structural notion will help you to read and interpret literary symbols. 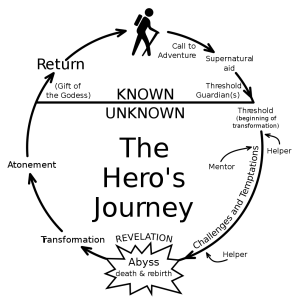 Almost every story, every movie, has a Call to Adventure. And those that lack this call tend to be didactic, often arguing that either the culture entraps the individual and is therefore disabled from setting out on a journey, or that–as in the film The Comedy–the hero has trapped him/herself within a wasteland-like state of being. In this state the hero is unable to the muster the courage to escape from what Jung calls “the merely attainable.”

Without leaving the mundane world, there is no journey. But one can leave the mundane world in other, nonphysical ways. Spiritual or psychological journeys can happen to the hero while remaining in the same geography. But this is not necessary since all points along the journey, all enemies and allies and places the hero encounters along the journey, are merely symbols which refer to our interior world, the hero’s inner-life, and not some outer circumstance.

Whereas in religion the hero’s accomplishments are often moral, such as insights into the nature of human behavior, and how that behavior should be controlled, or where our energies should be directed; in popular films, on the other hand, these deeds are often physical. But they can also have a psychological impact. The popularity of The Matrix is evidence that it had such an impact for some of its fans (even if, for some, the sequels dulled that effect). The video below illustrates the The Hero’s Journey formula at work in The Matrix.

Almost all popular films follow this formula–superhero movies almost always do; but the pattern is not always followed well, or is followed too well, and instead of writing characters, script writers can fall into composing conventional plots, with recycled scenes and platitude-speaking characters. All art needs formula. But all good art–whether films or epic poems–does not allow the form to dictate the content; nor does it allow the content to completely disregard the raw material’s need for form; but synthesizes the two, careful not to emphasize either too much, so that the story can communicate an impact. And if the impact is strong enough, we don’t think about the formula, we just enjoy the story.

It is also to important to emphasize the word impact: that is what mythologies are,  first and foremost, supposed to communicate. As Joseph Campbell write in  Primitive Mythology:

Art is not, like science, a logic of references but a release from reference and rendition of immediate experience: a presentation of forms, images, or ideas in such a way that they communicate, not primarily a thought or even a feeling, but an impact. (42)

Mythologies are constantly being reinterpreted and re-appropriated and changed. A simple example of this is the sheer number of distinct sects, not only in Christianity, but also in other major world religions, such Buddhism and Hinduism. Perhaps part of this division is dependent upon different interpretations of the texts themselves, but there is also many rules and regulations put forth in these texts that hardly seem relevant to modern life. To put it simply, the manners of economic exchange, the structures of our societies, the expectations of familial roles–all of these and more have changed to such a degree that some of the requirements put upon its followers by some of these texts seem inappropriate. Such as in Leviticus 25: 44-45: “Your male and female slaves are to come from the nations around you; from them you may buy slaves. You may also buy some of the temporary residents living among you and members of their clans born in your country, and they will become your property.” Since it is no longer legal, and generally considered immoral, to own slaves, this passage seems outdated.