At the very beginning of the video I thought that the main character, the mother, was a little over protective of her son. However, after he got arrested she did what any mother would do and tried many different options in order to prove her son’s innocence. Then as the movie continues I started to think she was a little crazy. My overall opinion of the mother stayed pretty consistent through out the later part of the movie. She was a mother who just wanted to protect her kid, and although crazy she just loved him immensely.

When considering the themes of motherhood and justice in this movie I think it was showing that the definition of justice depends on your relation to the accused. A mother’s love for her child is so great that sometimes even if their kid did something wrong they believe that it is their job to prove that they didn’t. Sometimes even the facts will not convince them that their child is guilty. I think that’s exactly what happened in this movie. The mother could not/ would not believe that her child could kill the girl.

I think that the small tin of acupuncture needles that the mother has is a symbol for the bad she’s done. The conversation of her illegal use of them is mentioned at the prison when her son brings up the fact that she tried to kill him when he was younger. Then her son finds the tin at the junkman’s house and brings it back to his mother.

1.Gregor’s relationship with is family is not very good. He is kind of like the annoying one in the family. I think this is shown by the fact that he turned into a cockroach. Out of all bugs he turned into a cockroach, one of the most annoying bugs in my opinion. His relationship or lack there of with his family is demonstrated in the interactions between his family members and himself when he is a cockroach. For example in the story his sister says, “…and so I will merely say: we have to get rid of it’ (973). Although at first she gave him food and tried to look after him, end the end everyone wanted Gregor gone. I would say the relationship between his father and Gregor is one that was very prominent in the story. In the story his father is constantly trying to get rid of Gregor in ways that demonstrate that he is the person in the house that holds the power. I think this symbolizes that Gregor’s dad feels threatened by him and his coping mechanism is to try and prove his place on the power ladder.

2.The first central event in the story tells about how Gregor is afraid of losing his job and how his family doesn’t really get along that entirely well. The second part is centered around his actual metamorphoses and what happened while he was a cockroach. The third section focuses on the fall of Gregor and the “rise’ of his family. In the second event it really shows how weak Gregor is in the situation. He can’t feed himself and so his siter has to feed him. He also can’t work which means he can’t make money. This is what leads to the strengthening of his family though. Because he can no longer be the provider for the family they start to learn how to provide for themselves and in the end become a better and stronger family.

3.I find Akhmatova’s Requiem as a political protest was not effective for trying to persuade people one way or another during Stalin’s rule solely because it was not published. I do think that it has been very effective in giving an example for the people after that time and has made an impact in history.

4.I think we should interpret the quote as being a hint as to how as individuals, we should try to be in the world. Everyone can benefit from changing their lives, even if there is just one thing in their life that they change. This change also sparks other people’s ideas and thus creates advances throughout society and the world.

I think that on Dante’s journey through Hell he learned that there is more to Hell then just fire and bad people. There is an order to it and a system in how everything works there. The nine levels of hell categorize the people that end up there. On a more spiritual level he learned just how much every action you make in your life will affect you in the afterlife. 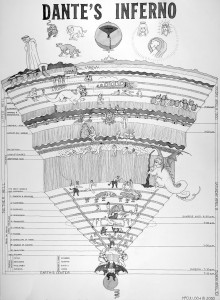 While reading about the journey I learned about the different levels of Hell, so I would say Dante’s learning and mine were similar. I always just thought of Hell as an unpleasant place where people committed the worst sins went after they died. Before the reading I hadn’t really thought about what would qualify as a “bad enough’ sin to get you sent to Hell. It brought up the question to me, “Does Heaven work the same way?’

1. In general most people hold value in trust so when they think their trust with someone has broken they get angry. This is just what Shahrayar did, he got angry when he found out his wife was cheating. I think that underneath the macho male ego is truly frail. I think that in societies where men are expected to be the macho ones (between women and men) that (most) men spend so much time trying to act macho that when they get home the faÃ§ade goes away and they are actually frail human beings. In relation to the story, I think that going through a problem, especially with your wife, and still having to be the king for a community of people would be very difficult. Being frail would not be an option and therefore at the end of the day it would be very likely that they would break down.

3. I think that most of the penalties dealt in Inferno were appropriate. I think that Hell is an ugly place and that people who get sent there did not just make a mistake or two, they did something(s) horribly wrong. There are some people who commit sins that are unforgivable and they should suffer more than just getting what they did to someone done to them. On the other hand there are a large sum of sins that people commit that they don’t need done back to them in order to understand what they did wrong or just simply be punished in that way for.

1.  I think that the fact that Rama is portrayed as a “virtually perfect man’ does not make his character less boring than other heroes. I think that the author does a good job at showing specific examples of Rama doing the right thing when faced with a hard decision of whether to do the right or wrong thing. For example in the headnote it says, “Faced with disinheritance, RÄma sees clearly that a son’s highest duty is to honor his father’s word, even if it means giving up his kingdom’ (725). This gives good depth to the character and I think that is what makes a good story. Shortly after this quote the author talks about how RÄma was not only doing what his father wanted but also doing it to honor Dharma. This is a way of showing that he wasn’t born perfect; he was constantly working on doing the right thing to stay on a righteous path. His mother shows this same attitude when RamÄ is exiled. She is very sad and obviously does not want it to happen but she accepts that he must go and she puts her feelings out of sight, so to speak. This is an example of the Hindu belief that one should look to Dharma in every situation and do things that will lead them (or stay) on the path to Heaven.

2.  Arjuna is afraid to fight because he does not want to fight his own people, “his family’ ans he says in line 37 of the poem. He does not think that fighting them would give him a victory, or any sort of happiness. His dilemma is much different than that of Achilles because he was really selfish and did not care who he killed. He just didn’t want to be in war because he was afraid of losing. Krishna tells Arjuna that he needs to do be detached and do it for honor not for himself. Medea wasn’t following a code when she killed her children; she was just doing it for revenge.

2.I think that the element of the virgin birth is the most prominent of the elements in the narratives that are culturally familiar to a pagan audience. The Greeks liked Jesus and his stories because they were very familiar with stories of people who were half human and half God.