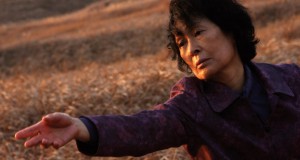 My perspective of the mother did not really change throughout the course of the film. At the beginning, we see her dancing in the middle of the field, which seemed odd to me and left me with a sense of foreboding that something was off with her. Going back to the beginning, she is definitely a protective and slightly overbearing mother who has made her son her sole purpose in life. The mother’s near fixation on everything he does has manifested into a warped dependency on him as her purpose in life. While it’s arguable that any mother would be unwilling to believe that her child is capable of murder, her fanatic search to find the murderer further shows her inability to continue on without her son.

The movie exhibits how poorly women are viewed, and the difficulties of single mothers in this culture. In terms of justice, supposedly there is none. Do-joon is released, after which he admits to the murder, and the Mother has killed the innocent junkyard man.

I think the needles symbolize criminality and perhaps of intentional ignorance. We are told that she does not have a license to practice acupuncture, but she still does and continuously denies it. She also drops the tin at the scene of the crime, and her son gives it back to her. She uses the needles on herself and medicates herself into presumed memory loss, and I think the following dance is of obliviousness.