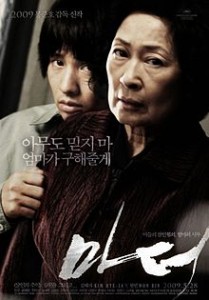 The mother in this film starts off as a protective mother trying to find justice for her son whom she believed was innocent of the murder he was arrested for. This could possibly be as a result of guilt from her past failures as a mother. At the end of the film when faced with the possibility of her sons guilt given to her by the old man in the junk yard, she becomes   enraged/defensive (possibly at the truth being spoken, and that she maybe knew this all along). Then when told by her son about his guilt in the murder, she wishes to forget. This movie seems to show the blind love mothers feel for their child, the compassion given when it may seem none should exist. I believe that the love a mother should have no bounds, that a mother can love her child without condoning or approving of it’s actions and choices. I feel that the small tin of acupuncture needles represents her guilt or secrets whether it be as   a mother or legally. She practiced acupuncture without a license, so hidden from regulation and the law, and she herself committed murder leaving it at the scene, then finally full circle the son admits his guilt and hands her the tin.