1. How does your view of the main character change throughout the course of this film? What does this movie say about its the themes of motherhood and justice? And what do you think the mother’s small tin of acupuncture needles symbolizes?

“Mother” or “Here She Comes”. Well known for her passion for her son Do-joon, few realize how deep the passion of motherhood runs. Photo from www.cinapse.com

In the beginning of the film, “Mother” is almost a-typical of the many women I met when I was in Korea.   Her way of talking, her mannerisms and assurances, her expressions, were all very much the same as the older generation women that peddled food in the market-place and in the restaurants.     This familiarity was especially present whenever the character was stressed over her son, getting upset when he was heading off on the town, when he was leaving dinner before he had eaten as much as he needed.   When I was in the street market in the village outside the Camp my squadron was staying at you seemed to hear a lot of such calling and noise going on.   A very different world than the one I grew up in.   “Mother” is a little high strung, a bit of a nag on the boy, and doting on him constantly.   Always trying to hide his little quirks from others sight, as if they didn’t know he was different. 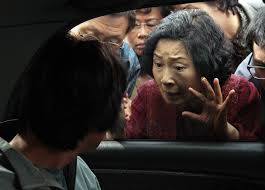 We never learn “her” name. She is “Mother”. Photo by www.fatpie42.livejournal.com

As the film progresses, I don’t think this changes a great deal.   She is still the same, but the viewer looks deeper into what drives Mother and how her love for her son has had very deep, painful moments.   The wail that comes from her as Do-joon confronts her with the past is as emotion laden as when she cries out as he is hit by the Benz.   Love for this boy drivers her.   When she moves to kill the junkman, its not denial we are witnessing, but fear of the truth being brought to light.   She has weighed the value of the junkman vs. the value of her son and found the junkman (perhaps because of his link to the rice-girl) to be “not worth the dirt under my son’s toenails”.   Again I don’t think we are seeing anything different than we did in the innocent beginning just before the wealthy golfer’s Benz “whatever it is” screams by.   We are witnesses to the depth of the same emotions.   A mother whose sole purpose is to preserve her son.   So my view of her does not really change, although I found it interesting that as she woke to the realization she could not easily hide the junkman’s murder, she calls to her own mother, just for a brief moment.   A crack in an other wise formidable willpower.

She certainly isn’t the first parent to act viciously out of protection and she seems to see that her own advice to Do-joon, to strike back when taunted, has come full circle and “struck” back at the pair of them.   Throughout her amateur investigation, she is on track to seek justice for her son, until she meets the junkman.   The junkman’s story makes too much sense and he describes Do-joon in such a way that the tale rings true; Mother can verbally, but not mentally deny it.   “Mother” acts decisively, all guesswork gone.   She strikes for her son.   In the end, as she weighs the life of her son a second time, with the life of the jailed “JP”, she asks him if he has parents, “don’t you have a mother?”   His answer to her seals his fate.   She knows her son is guilty, as she now is as well.   But since JP has no mother to mourn for him, she keeps quiet and lets him take the wrap.   Her grief on his behalf is still present, even here, as a mother, it pains her a great deal to “cheat” justice with “JP’s” life.

Her box of needles. A tin of memories.

The tin of needles is like a little magic box.   Its a difficult thing to really “pin” down.   This woman who is apparently not taken very seriously seems to actually know a little about a lot of things.   Do-joon says, “what do you know?”, mocking her in child-like frustration and she acquiesces a reply saying in a mothering tone, “Yes, what does a mother know?”.   But she does.   She knows a lot and is able to bring the pieces together to keep her son from paying from the crime.   The box of needles is power to her. Serving as a source of income, it also serves to hide the unpleasant things in life.   It eases painful memory, it perhaps hid the truth from Do-joon about her attempt at dual suicide.   In the end of the story, as she realizes that Do-joon knows more than he lets on, it pulls her out of the shock she has had.   She is then able to participate in the community around her.   So the tin box is perhaps like Mother’s keeper of memories, of painful things best kept under the rug.