What do you believe the demon symbolizes in the The Story of the Fisherman and The Demon? What allegories do you read in this story? 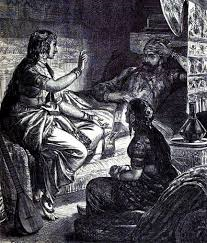 I think the demon in this story represents the journey that the king takes in the Thousand and One Nights. The demon is bitter at being trapped in his tiny jar far out at sea, and determines that through the actions of one man (Solomon), he will kill the next person to open the jar, just as the king is bitter at the actions of his wife and determines to kill every woman he marries . 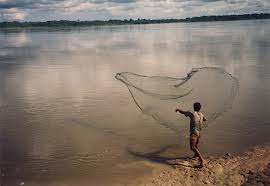 The fisherman actually symoblizes Shahrazad — both of them tell stories to immediately halt the demon and the king from carrying out their evil acts by peaking their interest. These stories are not only entertaining, but always have a moral attached. In the fisherman’s story, the moral was that “no good deed goes unpunished’., which makes the demon rethink his plan to kill the fisherman (well, that and the fact that the fisherman was going to throw him back in the ocean). Likewise, Shahrazad’s tales are making the king rethink about killing her immediately — he’s interested in her stories and wants to find out what happens! Eventually, the demon leads the fisherman to a magical lake with strange and mysterious fish and vanishes, symbolizing the exorcism of the king’s own demons — his need to heal from the bitterness his wife introduced into his heart.

3 thoughts on “The Thousand and One Nights, Take 2”