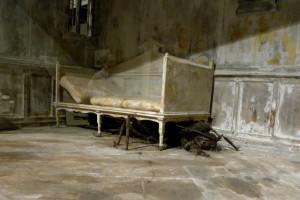 Gregor’s relationship with his mother and sister is generally one of fondness. When he makes his transformation, his sister takes charge in trying to look after him by providing him food, cleaning his room, and moving furniture so he has more room to move. However, it is very probable that she took this role upon herself to spare her mother from having to witness Gregor’s transformation and prevent her father from killing him. His mother, full of maternal concern for him, wishes to see him, though she is barred from doing so by the father and sister. The reader knows that Gregor cares for his sister, as he acknowledges that “only his sister had remained close to Gregor, and it was his secret project to send her…to the conservatory next year…and meant to announce it at Christmas,’ (959-961).

His relationship with his father does not seem particularly strong. He seems mostly concerned with the financial state of the family rather than Gregor’s well-being. When the Chief Clerk came to check on Gregor, his father was not concerned that Gregor was unwell, just that he was risking losing his job which supported the family. Additionally, he treats Gregor as an animal, urging Gregor back into his room violently, both “enraged and delighted,’ (965).

Together, his relationship with his family is not strong. He was the sole provider, so often gone early and mostly concerned with bringing in money. After waking up, he was not concerned with his metamorphosis, but with the fact that he was late to work, that he needed to pay his parent’s debt off, and that he might be fired. When he first went to work as a salesman, the success and money had delighted his family. Now, “they had become used to it, both the family and Gregor; they gratefully took receipt of his money, which he willingly handed over, but there was no longer any particular warmth about it,’ (959). Both he and his family became used to him providing, and there was not much more of a relationship he had with them.

In the first section of the metamorphosis, Gregor still sees himself as the primary caretaker in the house. His mother, sister, and father are concerned that he is not about his usual business, and are at a loss as what to do.

The second section is a period of adjustment. Gregor becomes more animal-like, testing out his new body, ability to crawl every which way, and coming to terms with the new routine of his sister bringing him food and cleaning his room. Previously he had kept his door locked and the thought of calling for help laughable. The family is coming to terms with the fact that there is now a creature in the house. His sister, taking on the role as his caretaker, begins to earn the respect of her parents and they acknowledge and praise her for it. Her confidence grows as she finds herself contributing and takes pride in that she knows what is best for the new Gregor. Her father returns to work, and also grows more confident. When Gregor encounters him, he was unprepared for the alterations. No longer was his father shuffling about feebly, but “fairly erect…[with a] vigorous expression in his black eyes,’ (966). Gregor’s mother, though she fainted at the sight of him, was determined to prevent her husband from killing him. 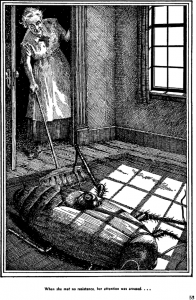 In the third section, resentment begins to build. Although they begin to open the door to allow  Gregor to see into the living room, we see that his sister no longer takes the time to clean his room. The lack of hygiene, attention and general ill-will toward him causes Gregor to become more desolate and he nearly stops eating and caring about things he had previously, like being seen. His sister takes on work, his father continues his, and they take on tenants. Overall, each member of the family now plays a part and contributes in some way, so they acutely feel the burden of the monster in their house. His sister snaps, “if we have to work as hard as we all are at present, it’s not possible to stand this permanent torture at home as well…this animal hounds us,’ (974). When Gregor passes, it is a great relief to all of his family. They all take the day off and, with the shed of their burden, think about their future.