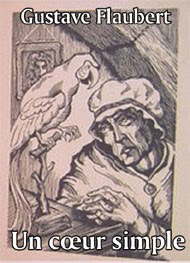 I believe that as it states in the title, she is but a “Simple Heart”. Both kind and naive to the world around her, Felicite is both loving of those in her life and excepting of the lot she has been given in life. Mme. Aubain is less outwardly kind and more caring in the sense that she wants what is best for her children. She seems to see Felicite’s affection for them as coddling. Overall they both have good intentions just with differing directions.

Baudelaire seemed to demonize women and their beauty(all while describing their beauty). I had a hard time discerning his love or hate for the fairer sex, but it seemed that it was because although he loved the beauty, he also knew that the same beauty could be or was also his or mans undoing. Men in Baudelaire’s writing seem weak and lack willpower of any notable standing. Men in this light are out to gain only satisfaction and thus are easily lead astray by women.

Chidam and Chandara have a bitter and callus relationship, constantly bickering. Their relationship seems to me to be one of convince more than that of love.  I feel that this is contradictory to the relationship of Rama and Sita which seemed to be more of love, respect and honoring the other. Chidam and Chandara also come across as petty and vengeful while Rama and Sita showed a more strait forward and honest love for each other.

I have the hardest time discerning the meanings or poetry, unless completely straight forward. So I looked at “Leda and the Swan”, a twisted tale made poem. Leda a young girl is raped by the Greek god Zeus in swan form.  The poem itself conveys the rape, and was easily understandable, however, I could not tell the tone of the poem overall, the author neither commits to define this as a divine encounter or a violent rape, I assume this is purposeful to let the reader decide.  I also noticed something interesting while looking for a image to include in my post, that most of the artwork associated with this tale, that I could find, do not depict  a violent rape, but a sensual encounter or something similar. I ultimately chose not to include a image of this do to the contrasting views on the poem and imagery.