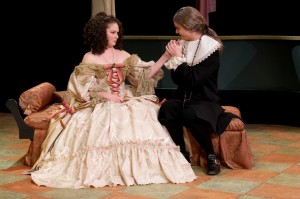 Tartuffe is not anti-religious; rather it attacks the corruption and hypocrisy of dishonest piety. Cleante makes this distinction several times throughout the piece. When Orgon is blinded by Tartuffe’s act, Cleante tells him, “Those whose hearts are truly pure and lowly don’t make a flashy show of being holy. There’s a vast difference, so it seems to me, between true piety and hypocrisy… [Man] by transgressing Reason’s laws, perverts lofty aim or noble cause,’ (p.115, 71-74, 85-87). The characters not convinced of Tartuffe’s religious zeal try to make clear distinctions between a holy man and a hypocrite. For instance, a devote person will not condemn his neighbor and spread gossip. Chatter and scandal is spread by those who themselves have committed terrible deeds, so are trying to lessen their own faults by enhancing others. Later when Orgon comes to his senses about Tartuffe, he claims to be through with pious men and hates the whole false brotherhood. Cleante implores him to see reason and articulates that there is a distinction between religion and those who truly follow it, and those who manipulate it to advance their own interests. “Just because one rascal made you swallow a show of zeal which turned out to be hollow, shall you conclude that all men are deceivers, and that today, there are no true bleievers? Let the atheists make that foolish inference; learn to distinguish virtue from pretense,’ (p. 147, 45-50). 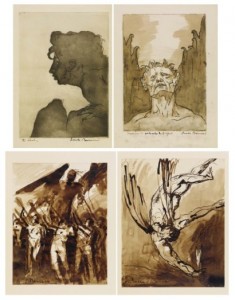 Hugo’s Satan is cast as a heroic figure because he is portrayed with emotions that we can relate to. A rebel, he is at first dumbfounded and grim, filled with horror and wishing for death as he falls into an endless chasm. Somber, he feels the angel within him dying and begins to feel regret. However, as long as he can see the sun and light, even far away, he can accept his fate. Suddenly the only sun left, though, begins to die, and he is filled with a crazed urgency. In desperation he chases the light, pleading not to be left alone, fearful to be left in darkness. He calls out to Jehovah like a lost child, repentant. As he flies for ten thousand years, he is given hope intermittently, just enough to keep him going. He is a creature to be pitied, broken and tired, filled with despair, and wishing not to become the monster he feels himself becoming. As Christians, repentance and forgiveness are pillars of faith, so we are meant to sympathize with the one who rebelled against God, then wished to atone for it.

There are some similarities to Dante’s Satan, who weeps with six eyes (perhaps this could convey remorse) and whose breath creates wind in Hell as Hugo’s creates hurricanes on Earth. Dante’s Satan also suffers the isolation from light, life, and warmth, like Hugo’s in his abyss. Satan is also just as much in Hell as his victim’s in Dante’s version, and Hugo’s suffers as well rather than be in control. Dante also describes that Satan is grotesque, while Hugo says he feels himself becoming a monster. However, Hugo assigns his Satan with many emotions, whereas Dante portrays him as a slobbering unfeeling giant. 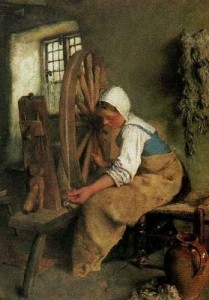 I chose “A Young Man Loves a Maiden’ by Heine and “To Sylvia’ by Leopardi. Both poems express a vivid sense of pain from love lost. The first is the romantic unrequited love of a young man who falls in love with a maiden who does not give him a second glance, even after she herself is spurned by another. It’s a poem of heartbreak that repeats itself throughout time. The poem to Sylvia is the love for a child or young woman, who died before her time. It tells of the lost potential, similar to the lost potential of the young man’s happiness, though this is the potential of a life that had yet to reach its prime. Leopardi weaves his sorrow more intricately, though it is also a tale that has unfortunately repeated time and again.

2 thoughts on “Tartuffe, Hugo, a young man loves a maiden, and to Sylvia”