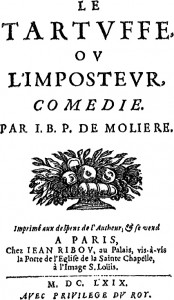 I believe that Tartuffe although very sarcastic toward religious figures was not meant to be interpreted as anti-religious. Tartuffe attacked the hypocritical figures of the church that were present in the time of its writing, and possibly still. I think that the corruption of  religion had been relevant for a long time and this is one of many outlets that we see from that time showing the frustration and discontent with the church and its clergy. It would seem a trend of artists to mock or elude to the wrongs of government or religion in their works, as it was a relatively  safe way to do so. In the end Tartuffe’s facade is seen through and he is imprisoned, overall I wouldn’t even begin to say this was anti-religious but just anti hypocrite.

Hugo’s Satan was defined, the poem tells of his fall and his suffering, he is made relatable. “He had been falling in the abyss some four thousand years.”

Satan in Hugo’s poem regretted his fall, and choices and this also makes it possible to connect with him on a base level, because he had faults as we have. Hugo also uses transformation but in reverse from what we might think a hero’s journey would impart. Satan falls from being an angel to a demon or “monster”, gradually losing his grace and relishing in his despair, caused by God’s anger. Hugo’s Satan compared to Dante’s who was just the center of hell, imprisoned and ruling as the ultimate sinner, and a prison himself the most deserving sinners. Hugo shows the sorrow, regret and anger of Satan, either at himself or his projection at god.

I have decided compare two poems from Giacomo Leopardi; “The Infinite” and “To Himself.  In “The Infinite” Leopardi refers to the endless space of eternity, daydreaming and envisioning the everlasting. He uses the images of sea and the sky to interpret the endlessness of eternity, while in the later poem “To Himself” he refers to the death of his last illusion, his belief in the eternal.

“…. The last illusion is dead, That I believed eternal….”

He also uses the word boundless, as he did in the earlier poem, to describe the emptiness of everything in contrast to the boundless silence used to summon eternity. One poem is light and reflective while the other utilizes dark imagery to convey despair in life and a wish or hope for death.