1. Is Tartuffe in fact anti-religious, or does it only attack corruptions of religion? 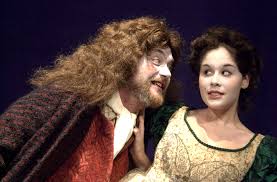 I found Tartuffe to be a very interesting read. I did not feel that it took an anti-religious standpoint, but simply used a religious hypocrite to exemplify how fraudulent people can be, in a way that many people can relate to as a community. In my experience, I have met many “religious” people that point fingers at other’s faults and can turn around and perform strikingly similar acts behind closed doors. The spreading attitude of bigotry, in the community presented in the story, was there to show a growing prudence and ignorance to the problem at hand. The way the tale was delivered provided the effects that hypocrisy creates in society and through the intellect and awareness of the King, the scam is seen through and the short-coming of society is identified. The Office states, “A King who’s foiled such liars by the dozen.” This brings to light that this is a common problem in society that should be dealt with.

2. In what respects is Hugo’s Satan a heroic figure? How does Hugo’s account differ from Dante’s? 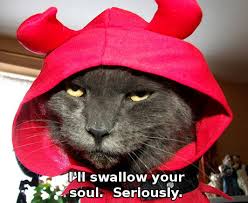 Hugo’s Satan, like many heroes of old, is a rebel of his society and thus banished by his father to the dark abyss. In his plight, he is challenged in a series of different aspects, which are meant to inspire fear and despair, but he overcomes these through determination and mere spite, while also finding supernatural aid of “beast like wings.” In the story, this scene is depicted in the verses stating, “In an instant he felt some horrendous growth of wings; he felt himself become a monster, and that the angel in him was dying, and the rebel then knew regret.” Satan is faced with less and less light, as the suns disappear. At one time, Satan tries to replenish a dying star and with his breath creates what we now call a hurricane. The power to create is heroic in itself, but the shear determination to continue through the adversity is a hero’s path. Once the void is complete, “Nothing” is able to raise his head from the abyss, triumphant in this and the heart of his star sends forth a jet of sulfur and creates his Angels. In the limitless shadow, Satan sees all that was preadamic, gaining the boon of wisdom and creating a new society, in which he reigns. This last bit fits the “Master of Two Worlds” theme in “The Hero’s Journey Defined” by Joseph Campbell because he is able to peak into the world he came from, but then chooses to reside below with all that he has seen.

3. Discuss & Compare the images in any two poems assigned for this week.

I would like to compare To Himself by Giacomo Leopardi and A Pine is Standing Lonely by Heinrich Heine. One similarity I noticed immediately was the use of nature or living things to display the phases of life the eventual bareness and death. Heine uses a pine tree that can be viewed to be full and resilliant to harsh weather, like a young man in the troubles of early life. The tree sleeps through life and is enshrouded in ice and snow, like a person that can truely only depend on themself and never truely acts to find love and eventually fades to white or grey hair. This pine dreams through life about a palm tree, which is a desirable vision that usually corrolates to tropical and beautiful weather and could be viewed as a beautiful girl. Sadly, the pine dreams or believes that this palm tree will stand lonely, sunburnt… drying and dying its life away. This could be seen as a view that life is meant to be lonely, hopeless and in the end…pointless. Both of the writers display a depressing view toward life and either a lack or loss of faith. Leopardi is more discrete at times than Heine like in his line, “The last Illusion is dead that I believed eternal. Dead. I can so clearly see–not only hope is gone but the desire to be deceived as well.” This last illusion could be faith or life after death, but could also be love. Leopardi says, “The world is mud.” In this statement, it claims that there is not much but bland exchanges to be had and he further determines that there is nothing to have anxiety over becasuse there is nothing to hope for. Leopardi blames nature itself for being the cause of his demise and ultimate dissatisfaction, where Heine uses it more as symbolic representation for people in life and the hopelessness it has for us.

4 thoughts on “Romanticism serves a purpose!”