1. Granted that Machiavelli’s own historical context is remote, how far does his pattern of contrasts between political ideals and concrete realities apply today?

Preface – My reaction to Machiavelli is somber and sad, because I see so much truth here.   I wish no offense to anyone and these are simply my thoughts.

“Any man who tries to be good all the time is bound to come to ruin among the great number who are not good.”   (Norton, 1609) 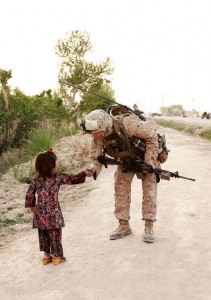 “We want to be good.” A U.S. Marine stops to shake hands with a young girl while on patrol in Marjah, Afghanistan. Photo by US Central Command.

If we are good, all the time, with everyone, we are bound to be defeated by those who are not good.   This doesn’t sit well.   We don’t like that in this country.   It doesn’t fit our ethics, nor does it fit our self-image.   In spite of the evidence, we’d like to think of ourselves as a cut above the rest.   Then again, I think we are, but I digress…There is much in this that makes sense when we look at how our country has dealt with the assault on our nation since 9/11.   In an effort to bring about justice, to punish those who oppress, we have been harsh at times and this has produced results, while leaving a bad taste in our mouths.   Those of us who believe peace is not paid for with blood cry out against those who would swing the mailed fist in our defense.  A mother whose son has fallen to a road side bomb cries in agony.  Our resolve cracks.  Our nation’s conscience keeps us from striking as deeply and cruelly as is necessary in order to bring closure to the trial we find ourselves in.   Those we defeat bow and grovel and when we have shown mercy, they strike back.   Our allies gladly give us support when we lavish them with gifts, but as we do, they open the gate to let in the wolves.   We hate, but we want to be kind.   We overtake and bind those who hurt us, but release them in the name of our own love of freedom.   They grin.   We will see them again.   And so it is also with our own people.   Is it effective to give government welfare to the needy, taxing those who have to pay for those who do not?   Does this type of “liberality” serve us in the long run?   We have run up large debt with our liberal ways.   We have fought our wars with borrowed money.   Those who are taxed heavily by the Prince feel it sorely.   We are merciful and lenient in court, only to face the same criminal on the next day. 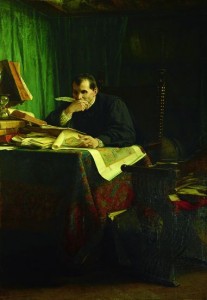 Niccolo Machiavelli.   An Italian Patriot? Perhaps no different than a John Adams or Thomas Paine. Calling for leadership in a land longing to be led.

We want leadership, but we also want our luxury.   Like Machiavelli’s Italian armies, we send our magnificent young people to fight a war, but the leaders we have elected are full of words and much misguided action.   We are needing a Prince who will lead our nation, but in order for him to succeed, we would have to surrender our freedom.   Abraham Lincoln was such a man.   He did what had to be done.   He was hated for it, but respected in the end, with his head on a bloody pillow.   Machiavelli points out that his homeland of Italy is in dire need of a strong leader.   One whose virtues mirror his model prince.   Good, but not too good, frugal in social security, not too loose with his funds, feared more than loved, merciful, yet harsh when necessary.   These are realistic traits of successful leaders in history.   They are the traits our own nation seeks when it votes for this smiling senator and that.   We rarely get what we have been promised.   When we do though, often we do not recognize it and we rage against it, like a crazed dog after a tick in its hind leg.   Our nation’s Christian conscience keeps us looking for a leader with virtuous traits.   I don’t think we’ll find one.   I don’t think Machiavelli did either.   “…I don’t doubt that every prince would like to be both; but since it is hard to accommodate these qualities, if you have to make a choice, to be feared is much safer…” 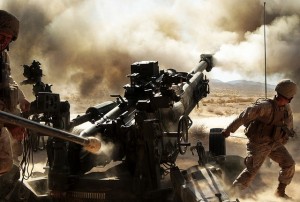 “To be feared is much safer than to be loved”. “Let ‘er Rip!” Photo by Cpl. Ali Azimi. Released USMC.

2. Sister Juana de la Cruz cuts off her hair to force herself to learn more quickly, although she knows that among young women, “the natural adornment of one’s hair is held in such high esteem.’ Finally, she enters the convent (where woman had their heads shorn). What other works have you read that emphasize the importance of a woman’s hair? Why does it seem to have so much symbolic value in such a range of cultures and times? 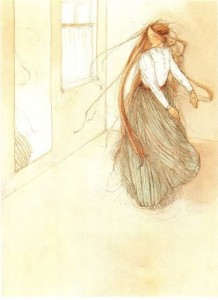 Della contemplates losing her long hair. The Gift of the Magi, by O. Henry. Illustrated By Lispeth Zwerger.

The story, “Gift of the Magi” is brought to mind.   The husband sells his pocket watch to purchase his wife a comb and brush for her beautiful long hair, she sells her locks for a watch fob to secure his beautiful time piece.   Each of them sacrifices a hallmark of their character in order to obtain a gift of great value for the other.   There is something about a woman’s long hair that is simultaneously a hallmark of womanhood, and something of the lion’s mane.   We grimace at a woman without hair and turn our eyes away.   It might be entirely a cultural thing, but a powerful one, nonetheless.   I am no expert, however, I will admit, I am entirely a man.   Along with countless others, I love my wife’s long hair and that of my daughters too.   I think that has a lot to do with it.   Men really like it.   So it offers praise, beauty, and even power.   For surely I will feel distressed if my wife threatens’ my daughter’s long hair with a shorter cut.   I   find myself scowling and feeling gloomy…

3. Bear in mind that the Aztec warrior’s highest duty is to bring home live captives for sacrifice. Give the Song for Admonishing a careful reading and decide–without researching the entire Cantares Mexicanos–what possible meaning might be assigned to the figurative terms “flower’ and “song.’ 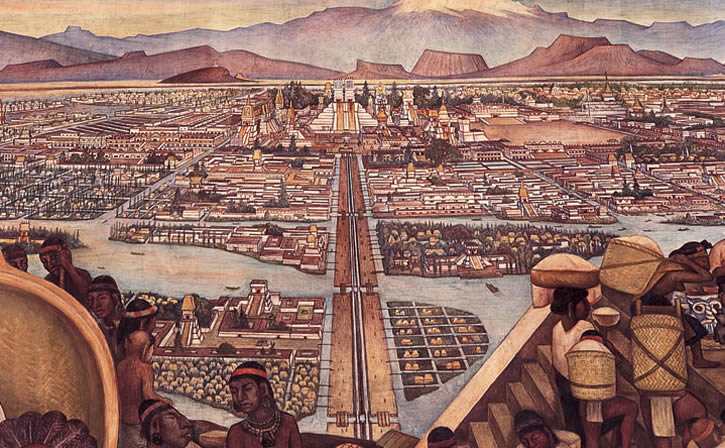 The capital of the Aztecs, Tenochtitlan, where the temple stood. Photo pinched off the net…

Its seems that the singer is a warrior, calling other warriors to rise to his drumbeat, or “song”.   This song is possibly the “call” for sacrificial captives.   Perhaps the song is the warrior’s duty or life and it is being used to rouse the “hearts” of those who are not inclined to go to war.   Flowers dripping down the side of the drum are perhaps the references to blood and triumph over enemies in the warriors call.   “Arrow deeds” are likely battle honors or actions which lead to capturing sacrificial prisoners.   These must be the flowers then.   The “flowers of the dawn are blooming”, perhaps is the capture of those sacrifices, to be given to the “eagle-jaguar princes” who seem to crave them.   So I’m thinking that this garden is where the God’s dwell and they feast on the flowers till they are drunk.   Confusing.   Better to just come right out with it.

4 thoughts on “Discussion # 10 The Prince, A Woman’s Hair and the Aztec Warrior”