1. The Tenth Story of the Tenth Day: Why is Griselda being tested? 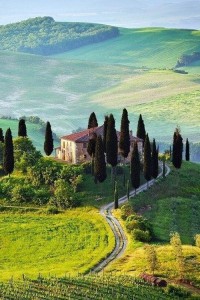 “The spot in question was some distance from the road…” A Tuscan Country home. Not quite a palace, but located south of Florence, could very well give us an idea of the region the Decameron takes place in. Photo Public Domain.

Gualtieri suspected Griselda of “rancour”, hidden beneath her quiet patience.   Rancor, or “rancour” in the text, is to harbor bitterness or resentment, especially for a long time.   This suspicion is revealed at the end of the tale, just prior to Griselda’s restoration to her position as Gualtieri’s wife and Lady of his house.   But in the beginning of the tale, the reason for his hostility towards her and his cruel deceptions is unclear.   The reason given is simply, “Gualtieri was seized by a strange desire to test Griselda’s patience.” (Norton, 1359)   So we are left to accept that Griselda’s husband was not so much troubled by the grief he caused her, but was reacting to his own impulses.   Indeed, being “seized” suggests that it really wasn’t his fault.   This is perhaps a hint that the Decameron is written with intent to reinforce commonly held beliefs about the roles of men and women and their rights to act within these roles. Considering Gualtieri’s reluctance to marry in the first place, and considering he is a feudal lord, we can assume he is suspicious of her because she is exactly the opposite of what he is expecting in a woman who has been brought from poverty to wealth overnight. 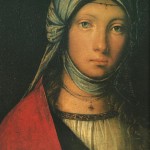 Painted by an Italian with a similar name as the author of the Decameron, this Gypsy girl strikes me as a possible pass for Griselda. Painting by Boccaccio Boccacino, ca. 1516-18. Florence Italy.

One might expect all the attention, luxury and good living to go to one’s head, raised as Griselda was, in a peasant’s hut.   But what is the point of such a story?   Does it highlight the virtues of the woman of the Renaissance?   Does it try to quash the freeing spirit of the times?   Told as it is, not by the young female adventurer Filomena, but by Boccaccio, it is hard to see it as representative of the feminine viewpoint of the times.   I believe, like the Tenth Story of Nastagio and the woman torn apart by the hounds, this is an encouragement to young women to do the dutiful thing and comply with the standard.   The effects of the plague in Italy had obviously shook the status quo up to the point where Boccaccio felt the need to engage in this type of dialogue (Norton 1327).

2. Compare the frame tales in the Decameron, and The Thousand and One Nights. In each case, what is the reason for telling stories? Do the stories accomplish the purpose for which they are intended? How important is the relationship between the tale and the teller? 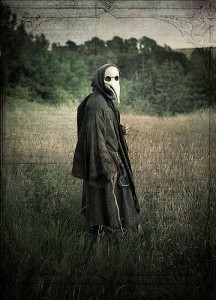 The Plague Doctor. A sign of the times. Photo unknown credit.

In The Thousand and One Nights, the stories are told to delay the inevitable, to stall for time.   Shaharazad is gambling her life on a chance that she can stay execution and therefore remain in place for yet another day, earning another girl in the kingdom more time.   By contrast, the Decameron is being told in order to pass the time by, awaiting either relief from the plague, or to be taken by it.   Pampinea’s suggestion is made in order to take the group away from the nightmare conditions they find themselves in where “…we linger for no other purpose, or so it seems to me, than to count the number of corpses being taken to burial…” (Norton, 1338).   So in the case of the Thousand and One Nights, the effort is made to forestall fate, in the Decameron, it is made to occupy time while fate either passes by or overtakes them.   In both stories, the telling of tales has the desired effect.   Clearly, the sparing of Shaharazad and the cessation of murdering innocent women is the desired goal.   As for the Decameron, we assume it has the desired effect as all present in the party eagerly seem to agree to the storytelling plan, or so we are told. Again, in the Thousand and One Nights, the story teller’s relationship to the tale is critical and different from that of the Decameron.   Shaharazad’s life and the lives of her fellow women are at stake.   In the Decameron however, with the editorial notes we have for the three tales, there is little to suggest a relationship between the tale and the teller.   For instance, what would Pampinea’s purpose be in telling the story of Ser Cepperello or of Filomena telling the story of Nastagio.   There seems little relationship at all.

3. In Laustic, what does the nightingale symbolize? Explain your answer. 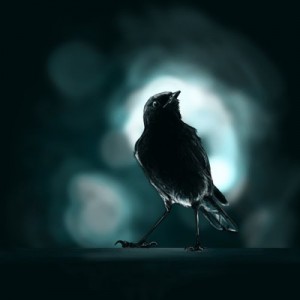 The song bird at night seems to be a frequent theme in love stories. “Ode to A Nightingale”.

It took a re-reading to really get a grip on the little bird and its role.   I thought I had perhaps missed the reference to it during the description of the knight and the lady at the window each night, but I didn’t.   The song bird is not mentioned of course until the lady must make an excuse to her husband for being up all night.   But the bird is naturally, more than an excuse, I think its clearly a representation of the unfulfilled love between the lady and the knight.

There are not many details in the story, but I think that the knight either takes the nightingale’s corpse as a token of love he cannot have, or perhaps the nightingale’s song at night was something he and the lady had shared during their nights by the window.   The story is set among two knights who both dwell in their own respective “fortified house”.   Most “forts” of the time came with some expanse of land, so I imagine seeing another person in a neighboring window at night was quite a feat.   However, the story gives the idea that somehow, the song bird either represents the lady’s love or their joint experiences by the window, and the knight understands this and intends to carry the bird in its casket, as his token or his love, unrealized.   One could say that he is carrying her broken heart in the “vessel”, made of pure gold and fine stones. 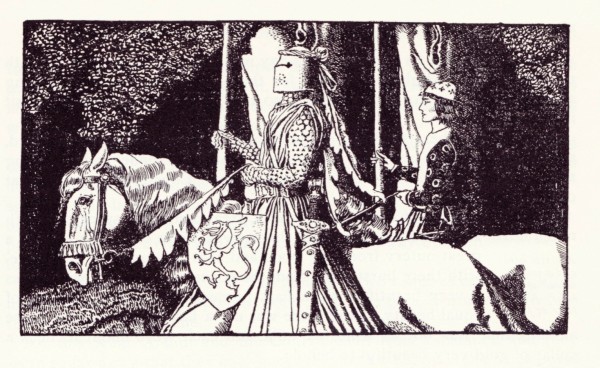 I find it interesting that the story stops where it does.   You would expect a clash of foes, knights in combat to win the lady, etc.   Everyone likes a good knight’s tale.   Next time perhaps.

7 thoughts on “A Country Holiday and A Nightingale..”