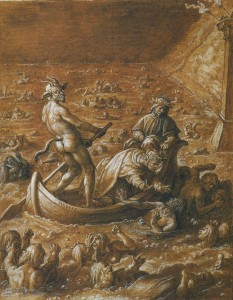 What do you think Dante learned on his journey through Hell? How does it differ from what you learned while reading about the journey?

The most literal and obvious lessons, which Dante learned on his journey through hell, are the consequence of sin and the suffering that has befallen so many “good & great” people of history. Dante’s initial fear to climb the mountain, symbolizing the path to heaven or salvation, is frightening at best and the trinity of powerful guardians evokes a fear in Dante that he can not surpass initially. With hope, symbolized by Beatrice, Dante embarks upon his journey with Virgil as his teacher and experiences an eye for an eye style of punishment, where each soul is tormented with a relatively similar pain to that sin, which they were consumed by in life. These consequences are illustrated in each stage bringing an understanding of truth and the possible fate that should await any soul, should they not mend their ways and repent in life. He is initially taken aback at the many great philosophers and teachers of Greek enlightenment, when Dante states, “O glory of the sciences and arts, who are these souls enjoying special honor, dwelling apart from all the others here?” He learns that these great men had not necessarily sinned, but simply were not alive before the time of Christ and their great works brought them favor in the depths of purgatory. Continuing along the path, Dante meets many souls, who in all their pain and sorrow, seam to either wish to be alone, or curse others for their current position. Dante does not further his initial pity for the lost souls, but begins to scorn and hate them as he experiences more cursed souls. Dante shows this most when he refuses to remove the ice covering the eyes of a tortured prior man of faith, after this man fulfilled Dante’s desire to know who he was and what brought him to that fate. Through his experience, Dante has learned to despise the wicked, but also that he himself will not pursue any of these vices, which have brought him to previous crossroads. The path to salvation has been revealed and the awareness that is expected of people in adulthood has now been bestowed upon him in the most literal sense that he is not fully responsible for his actions.

A few issues, which are perceived as sinful in Dante’s time are now commonly practiced, such as usury, or money made on interest. If this were true, then all the investors in banks  and many stocks would be on a fast track to Hell. This is just an example of how I have learned to pity many of those that face a possible eternity in suffering, in contrast with Dante’s scorn for those same people. Dante learns to despise all sin for what it is and those that commit it. I have seen more examples of how people who act on instincts or emotions prospectively damn themselves and this is not fair or just and makes it fairly impossible that judgement could be such a cookie-cutter fashion.