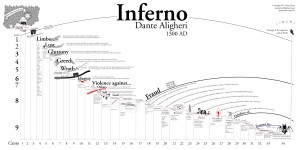 I think the character Dante progressed from being more sympathetic and pitying to being cold towards the damned souls he came across in Hell. At the same time, though, he is also going further into the levels of Hell where the sins committed can be considered more abhorrent, so in a way it makes sense he would be more judgmental. I think the ultimate lesson is to make certain not to partake in any action that can lead you further away from the will of God, or sin, because his punishment is perfect justice that human sympathy and compassion may blind you to. This is something that I struggle with despite growing up as a Christian. God is supposed to be merciful and full of love, so it is difficult to grasp that people who were not born into or exposed to the Christian religion will be punished for it and denied a place in Heaven, instead stuck in limbo because they are unaware. It makes more sense to me that people who actively seek and act in goodness will be judged for what is in their heart. I have to remind myself that this is also an individual interpretation of Hell created by someone imperfect so I can’t read into it too much past the main message. This brings me back to something else I learned, which is that Dante as an author has already come to terms of this view of Hell he has created. Even though he sympathizes with these characters, he still judges them and places them in Hell, again asserting that as humans we may not understand but it is God’s will which is perfect.

Personally, I learned that everyone must actively seek the right path. Everyone strays, but you cannot expect an obvious personal guide like Virgil. You must be committed to your path and have faith that Christ will guide you should you stray.