1. What do you think Dante learned on his journey through Hell? How does it differ from what you learned while reading about the journey?

Okay, just to reiterate what happened. Dante, the character went in kind of sensitive about the whole subject of Hell. I don’t believe he had a clear understanding prior to his experience of what resulted in a person’s actions while in human form. He burst into tears, cried, yelled then grew in to anger and flipped boats. He started damning all of the sinners who were already judged as evil. He learned that truly, about ‘karma’. From rolling stones with chests to being eaten alive by dogs, it really is hell. He learned that what you do on earth, if not pleasing to God, will put you here.

I want to say, now that I read my peer’s responses I could see how fraud and treachery would potentially be worse than murder as well so thank you for explaining that to me.

I don’t think mine and Dante’s learning was too different actually. I think he is still different than me as he experienced it first hand, so of course he learned more than me. Beforehand, I just pictured Hell as this great big, burning inferno full of hate and darkness. Not levels concerning the type of sin, but I was taught that if it displeases God than no sin is worse than the other, it is still sin. So I guess I never really thought about…what Hell does to organize its’ sinners or once the gate guard of Hell greets its’ new inhabitants there. 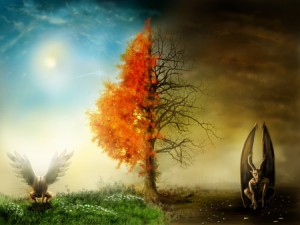 5 thoughts on “It’s Your Choice and Yours Alone.”