Although this is a story, and in many stories, I think the themes may always be a bit exagerated to help one truly grasp the meaning of the tale, one should be able to understand the heartbreak in the beginning of this story.   I for one, can understand Shahrayar’s madness.   He is under the impression that he is married to a faithful woman, and he is in love.   Finding out, however that she has been unfaithful drives him crazy.   He goes so far as to say “There is not a single chaste woman anywhere on the entire face of the earth.’ (pg. 1058)   I think that one can sympathize with him on his heartbreak, I can’t imagine how terrible that feeling would be.   However, I do think that his retaliation is a bit extreme, for him, I would say it may be a special case.   Egos may be more fragile when one is held to a higher standard, if the instance is public, etc.   Because he is a king, he may therefor feel as  if he has to prove a point to the entire kingdom and to show that he is still the boss. 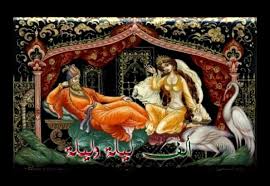 2.  Both the vizier and his daughter, Shahrazad, tell tales that surround their human characters with important animals, but the animals play different roles in the imaginative worlds of father and daughter. Compare and contrast the powers attributed to the animal world in The Tale of the Ox and the Donkey and The Tale of the Merchant and His Wife with those described in The Story of the Merchant and the Demon. How may these differences reflect the contrasting visions of gender relations so central to The Thousand and One Nights?

I am a huge fan of fables, stories, etc to teach a lesson.   I think it helps one understand and draw parallels.   The first tale, The Tale of the Ox and the Donkey, tells us how the Donkey, trying to be helpful and think that he is saving the Ox, doesn’t realize that he will take the Ox’s place.   The Vizier is worried that his daughter is acting as the Donkey.

The Tale of the Merchant and His Wife shows us how a woman at first can have a strong hold over a man and manipulate him (“Yes, I insist, even if you have to die.’ pg. 1061, he simply accepts this and prepares to die).   However, after hearing the conversation between the dog and the rooster he realizes that being a male he can easily show his wife that he is actually in charge and will not let her manipulate him.   This is somewhat contrary to the tale of the Merchant and the Demon where the demon has a dominating presence over the merchant, both are male.   I think that wether you are a male or female, it all depends on who thinks that they are in charge.   (Medea, the harlot in Gilgamesh, Samson and Delilah, etc)   I think that gender relations are a trivial part of this read.   Male or female dominance.

3.   Do you believe the penalties suffered are appropriate to the sins committed in Dante’s Inferno? Why or why not?

What was interesting to me was that sin was classified into different levels.   As if one sin is more trivial than another.   Isn’t sin sin?   What makes one persons sin greater than another?   I don’t think I know what the answers to these questions are or what they would be, I guess it depends on what a persons moral codes/beliefs, etc are.   This is what came to mind for me when reading about Dante’s levels of hell.   I personally always envisioned hell as a never ending pit of fire, and those who didn’t believe in God went there.   I don’t know if it is ok to sit on the fence for this question, however if I HAD to choose, I think I would say that the penalties suffered are NOT appropriate.   For one, I feel somewhat uncomfortable stating what a sinner deserves, because I know I am just as guilty of a sinner as anyone else.   I would like to leave that up to God to decide if one goes to heaven or hell, and then I suppose if you go to hell you are in Satans hands. 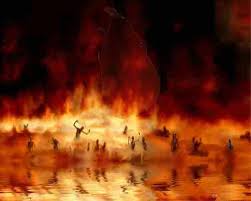 This is what I have always thought hell would be like