I would believe in macho societies male ego’s are fragile in the sense that their beliefs are based on a sliver of truth, “Men are stronger than women”. Though this is not always the case physically, it is the majority. Therefore in macho societies men believe women obey from fear and love because “men are superior”, and when this is questioned or disproven, the whole belief system topples. This belief that men are superior is merely a reflection of the   norm that men are stronger physically than women, but fails to realize that women, although usually less physically imposing, are equal if not superior to men in many aspects. 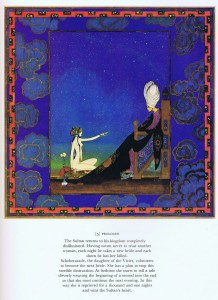 2.        The vizier uses The Tale of the Ox and the Donkey to try and relate to his daughter the flaw in her plan to marry the sultan. In this tale the animals have human like qualities speech and higher reasoning. While the story of the Merchant and the Demon the animals lack the ability to speak but are used as a justification in that they are forgiven and made to atone through work while women are beaten and murdered. The story of the rooster shows how in this society the women are thought to be inferior to men.

Though out this tale it seems as though there is a contrasting view, women are lesser, being the prevalent but also that they are cunning tricksters manipulating men left and right. It is almost as though women were feared, maybe rightfully so, for their abilities to sway men’s hearts. 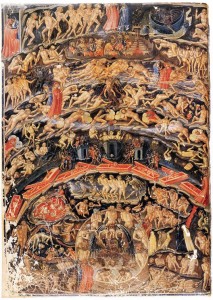 3.    I find most of the penalties suffered in Dante’s Inferno humorous if not appropriate though some make little to no sense to me. I quite enjoy how it is stated that the Astrologists or Diviners, forced to walk with their heads on backward, kind of fitting seeing how they spent their lives looking into the future. In the outlying region of Hell, the Ante-Inferno, where the souls who in life could not commit to either good or evil now must run in a futile chase after a blank banner day after day, this makes sense to me, while hornets bite them and worms lap their blood this not so much. Overall I like the punishments that are presented, but I don’t think they are just, if anything they are extreme, but again that is what makes them humorous along with the way they fit with the sins. Considering the time period and the characters in the story the penalties seem appropriate to the story.