Through the course of this interesting tale many lessons are taught and a view of Hell is shown. While personally I don’t believe that Hell is exactly as Dante describes it I find this to be very intriguing. I believe that through the course of each of our lives everyone will sin, no matter how small it may be. We are just human and humans definitely aren’t perfect. Whether that sin be purposeful or accidental I feel that Dante’s Inferno classifies nearly every sinful person in the level they belong. So for this discussion I feel that they best way to say whether all the penalties suffered are appropriate would be to go through each level. 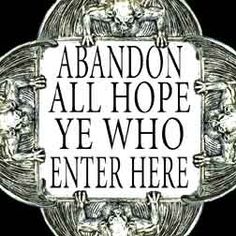 Right upon arriving to the gate of Hell Dante sees a sign that ends with saying “Abandon every hope, all you who enter,’ (1221). This seems rather appropriate for the entrance to this damned place because once a person enters there is a very slim chance they will ever get out. Limbo is the first level of this 9 level Hell. The people who are in this level are souls who didn’t worship God how they should have and are unbaptized pagans. While they have no sort of physical torment being thrust upon them they will never get to Heaven. I feel that this level of Hell is rather unfair. Many of the people that are here were born before God and if that is the case then how would they be able to correctly worship him? These people didn’t even get a chance to get right with God to be admitted into Heaven. So I would say that this first level of Hell isn’t appropriate for all people. The second level is for the lustful. Their punishment is that they will “forever whirled about in a dark, stormy wind,’ (1227). I feel like this punishment is rather appropriate. It isn’t too incredibly terrible but just bad enough to realize that they lived their life wrong. The third level is for the gluttonous. These people in this level “are eternally battered by cold and dirty hail, rain, and snow,’ (1230). Again, the punishment here seems rather appropriate. These people are ones who overindulged in worldly pleasures and were selfish and cold towards others. So having to live in the vile type of situation they probably created on Earth seems only fair. Next is the fourth level. This level is for the greedy. The people here are “angry, shouting souls who clash huge rolling weights against each other with their chests,’ (1233). These people are in constant argument against each other about why one group would hoard treasures and why another group would waste them all. This is definitely an appropriate punishment to me. They shall forever be in argument over their drive for lavish things. Level five is next and is the level of the wrathful. These people are forever condemned to fight each other. This is yet again an appropriate punishment because by being wrathful they hurt people around them and fighting for the rest of their lives is only fair. The sixth level of Hell is for the heretics or called heresy. These people are punished by having to spend eternity in flaming tombs. These people had a different belief to orthodox religious doctrine. While to people who are extremely religious this may seem just, I find it to be rather harsh just because these people had opposing beliefs. Level seven: the violent. This circle is separated into three rings. The first ring is for murderers and they are sank into a river of boiling blood because they have inflicted violence upon others. This seems quite fair to me. It is like they are condemned to be in the boiling blood of who they have harmed. The second ring is for suicides. These people are turned into trees and bushes and fed upon, while others are chased by dogs and torn into pieces. This seems like a bit of a harsh punishment when it comes to the dogs but if these people are going to harm themselves then they should kind of have to suffer. Killing yourself isn’t just an out. The last ring is blasphemers. These people reside in a desert of burning sand and burning rain. I guess again I would have to say these seem rather appropriate. Next is level eight and it is for the fraudulent. From my understanding these people are in raining flames. While I’m not sure how harsh punishments should be for fraud, I guess I feel as though this is fair. Fraud is a terrible thing to commit but I kind of feel like in a way murder is worse. Just depends on the perspective. Lastly is level nine, the level of the treacherous. The people of this level are frozen in a lake. The worse the sin the deeper they are within the ice. This seems like a fair punishment, I’m not 100% sure why but it seems to fit with the other levels.

With so many levels to Hell it seems as though each sort of sin is covered. While as above shows, I don’t necessarily agree with each of the punishments the people of each level suffer. But it does seem at least they are kind of judged fairly, for the most part. The most unfair part is really Limbo though. It just makes no sense that people who didn’t have God in their life because he wasn’t born yet should never even get the chance to be up in Heaven with him. They should be given the benefit of the doubt in my mind. I really enjoyed reading about this because last week I saw a crime show that involved Dante’s Inferno. So to see this used in a television show really grabbed my interest even more.

2 thoughts on “Dante’s Journey through Hell”