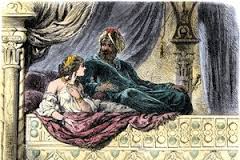 1. The cause of Shahrayar’s madness is very obvious. Whether male or female, the feeling of betrayal through infidelity can cause an unstable emotional rise. The shear comfort and well rehearsed harlotry practiced by  the queen and concubines gives the impression that this was neither the first nor last time it would take place. It is easy to relate to the frustration and confusion that takes over Shahrayar. It is a very biased question to even suggest that it is only the male ego that would take on these emotions and that this would make it frail. It is true that some couples are more comfortable or relaxed in their requirements of monogomism, but if these are the ground rules, then they are normally agreed upon and situations like Shahrayar’s would not take place. Sharayar did take his despise of females a bit too far. It is insane to imagine one to kill their new spouse on a nightly basis, regardless of their innocence because of one foul lover. 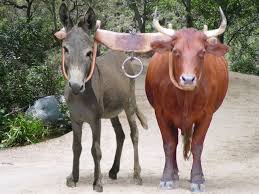 2. In the stories of “The Ox and the Donkey” and “The Merchant and his Wife,” the animals are victimized or are personified with traits usually associated with natural instincts or barbaric tact and have separate personalities, but the animals were still just that, animals since creation. In the stories presented in “The Merchant and the Demon,” all of the animals were once human, but are transformed to their particular animal as a punishment for evil deeds. It should be noted that animals in the first two stories can communicate and feel emotions, just as humans do, but the animals in the other titles are not shown with the ability to speak, but were previously people. In a few of these stories  women pose different attributes that bring them discredit, such as stubbornness, from “The Merchant & His Wife”; deceitfulness and jealousy, from “The First Old Man’s Tale”; and infidelity, from “The Third Old Man’s Tale”. Women are portrayed as being inherently evil, but as a whole these stories are told by a woman, in order to enlighten King Sharayar and spare the lives of many women through this act. This act itself was a selfless sacrifice by even risking the chance of death and proving heroic in her efforts. The brothers, from “The Second Old Man’s Tale,” are turned into dogs for their misbehavior and treachery upon the brother that treated them best. This very spell was performed by a woman, who was a demon. The symbolism here is that they were turned into lowly dogs, as they had been previously living their lives. All of these stories share the idea that people should be treated like the animals that they act like or rather just become them and lose their power to harm others. 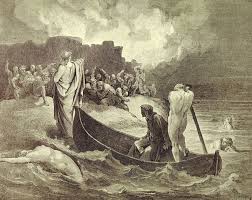 Dante reaches the shore near Dis…

3. Considering I do not believe that Hell is supposed to be a work place of fair treatment, I would say that the punishments people face are fair. If I were to consider the punishments for the crimes on an Earthly level, I would definitely say no… yet it could be humorous, as the term comedy has now become today. The idea that people would “follow a banner at a furious pace forever, and be tormented by flies and hornets” for simply not choosing a faith or perspective in life, seems harsh. I would have hoped that those who had not known, or decided, could simply not exist, as I believe they believe they will. I did find that there was a fitting place for those great philosophers, who may not have believed in an afterlife, but did believe in the virtues of man. Those great inspiring personalities had each other, to converse, to share gratitude, wisdom and future perspective. These very people earned the respect of those on Earth for being open minded, critical thinkers and having mankind’s betterment in their aspirations. I did find it humorous that the miserly were to roll huge weights at each other in a back and forth motion as though representing the way they intended to roll over all those in life to get the money they desired. Considering the people in Hell are to relive the sins they committed in life, this particular punishment seemed most fair. When Dante is visiting the Seventh Circle and those who waged violence in life, I felt particularly satisfied that it was broken up into three sections for those violent to one’s self, to spirituality and to others. I am not sure that all violence qualifies those in this particular circle for the punishment they receive considering murder is worse than fighting, but I am sure that at one point the scales are weighed.