I would say that at first, Rama seemed to be a bland character, because he was a heroic figure “without fault’.   However, I think that throughout the story there are instances where one can catch a glimpse of his human struggles.   Upon his victory over Ravana, he questions SÃ®tas chastity and faithfulness to him by harshly stating, “Your conduct is open to suspicion, hence even your sight is displeasing to me.   Your body was touched by Ravana: how then can I, claiming to belong to a noble family, accept you?’ (pg. 757)   I think this passage shows his inner turmoil on trying to achieve and be that symbol of perfectionism.   He loves Sita and went on a long and arduous quest to find her, and reaching his goal, questions her faithfulness and loses his trust in her.   Kausalya, additionally, has a difficult time as well.   Her actions compared to Hindu religion may be seen as somewhat unacceptable because she should respect and honor her husbands decision.

The Bhagavad-Gita interestingly enough reminded me of Job.   Krishna is there not necessarily questioning him, but trying to persuade him otherwise and dissuade his conscience, similarly to that of Jobs three friends who keep questioning him about his faith in God…   Anyway, back to the question,   I would say that I think Arjuna isn’t really scared to fight, it seems that he is more torn between familial code, and the warrior code.   In comparison to Achilles struggles,   Achilles refuses to fight because of his pride, however I would say his familial code overrides this struggle when his good friend is slain, if this didn’t happen he may have never have fought.   In comparison, Arjuna is struggling to fight because he thinks it isn’t right for brother to go against brother.   In line 31 he states, “I see omens of chaos, Krishna; I see no good in killing my kinsmen in battle.’   However, Krishna was able to persuade him otherwise.

In the story of the Offering of Isaac, I think that Abraham was faced with a hard choice.   His familial calling I think would be to spare his son, however he had complete trust is God and followed his orders, I guess that could be seen as the warrior  code. 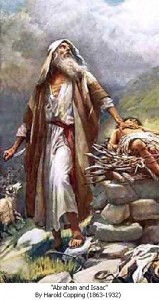 I think this picture really captures Abrahams turmoil, yet his resolve to do Gods will.

1 thought on “Ramayana & then Bhagavad-Gita”