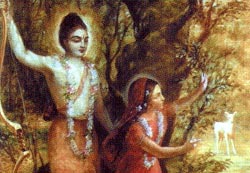 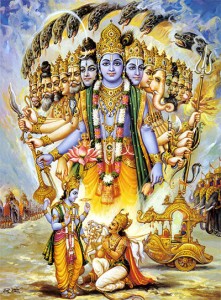 2.  It seems to me that the major difference between Arjuna’s dilemma and with that of most of the other heroes we have read about is that Arjuna does not want to kill, which is the exact opposite of the others. The others we have read the stories of have killed with little regard to much of   anything and that was part of their blight  that they then had to cope with what they had done or the effects of their murder sprees . Arjuna gives thought not to the victory or glory, but to the act of killing one’s own kin, and the kin left after the killing is done. To me this point of view is really quite admirable and it is really too bad that Krishna ruined it by talking Arjuna into fighting because it was his duty. Not his duty to obey the gods, but the duty of his status or role if you will, unlike Achilles who only refused to fight out of spite for his king, and then returned to fight when he is angered at the death of a friend.

4 thoughts on “Discussion 6- The Ramayana; The Bhagavad-Gita”