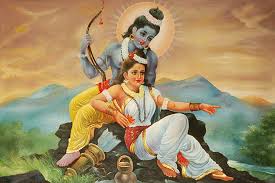 1. One distinct difference in other hero’s stories is the presence of a coming of age or great transformation through learning and life experience. Rama is already 25, when his story begins and may be viewed as less dynamic, but in no way shows a less fascinating hero. Rama has already been tempered through his development and makes decisions based upon the Hindu beliefs of self discipline and compassion, which helps them to achieve a higher moral plane and honor through commitment. At one point in “The Ramayana,” Rama loses his self control and lets his emotions run wild. Rama is at the point of a breakdown, from the loss of his wife, Sita, at the hands of Ravana and has seemed to have lost hope. This anguish seems to be his one weakness, similar to that of his mother, Kausalya, who believes she will surely perish at the loss of her son. She had stated that she would follow him and abandon her husband, but in his belief that this was unrighteous, Rama instructs her to stay and she tempers herself to do so. Rama must take his own advice and work to achieve his enlightened state, once again, gaining his self control. Once directed by the nature that surround him (animals as a collective), he is given hope, but is determined to wreak havoc and spread hate upon the demon, which has taken Sita. Rama’s alter ego, Laksmana, who is normally the aggressive and pragmatic character, actually has to advise and calm Rama and save him again from his wild emotions. These trials act as lectures to the temperament of all men and how one should conduct themselves. The ability to set aside ones emotions, such as Rama and Kausalya have done in this text, is examplirary to the compassion for other and truth of self, gained through temperment and understanding. 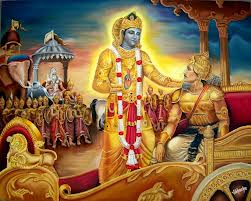 2.  Arjuna is a noble man, who is chosen to represent a dilemma that mankind faces in every day battles as well as the tough decisions one must make in their lifetime. In the Bhagavad-Gita, Arjuna sees no apparent point in the battling between kinsmen and asks of the point to Krishna. It enfolds as a duty, which must be fulfilled as it is Arjuna’s role in this life as a warrior to do so or face shame. The action faced in war, such as killing, is not reflected as a true sin, as it is not something that is sought or desired, but is simply a necessity to serve purpose. Achilles also serves his purpose as a warrior and lives without regret for the killing other men. He is simply fulfilling his duty and lives by a code of honor that does not deem killing in the name of one’s duty as action requiring repentance. The portion of the code outlined by Krishna, basically summarizes that actions are necessary, but the intent is what determines the effect on a persons’s soul and brings the weight of sin. Krishna states, “Look to your own duty,k do not tremble before it; nothing is better for a warrior than a battle of sacred duty. The doors of heaven open for warriors who rejoice to have a battle like this thrust on them by chance. If you fail to wage this war of sacred duty, you will abandon your own duty and fame only to gain evil. People will tell of your undying shame, and for a man of honor shame is  worse than death.” This code is very similar to that faced by Achilles, in his time and place as a warrior who serves man gods. To not serve these gods would bring great pain in the form of retribution, on behalf of angry gods. Honor is something gained in action and to be idle, as Achilles plays for a span, brings discredit to his purpose.

A few passages from the Koran, in Sura 5, The Table, provide some similar instruction on what is right or wrong and how the soul will be affected. The very beginning of the Sura states, “Believers, be true to your obligations.” In this one could determine that an obligation is also translated as a duty and with that, actions. The Sura also states “He that is constrained by hunger to eat of what is forbidden, not intending to commit sin, will find God forgiving and merciful.” Once again agreeing with Krishna’s instruction that it is not the action, but the intent or desire, which bears the importance.