1. Every epic work defines heroism differently, and many heroes are great of stature without being moral paragons. As the headnote to the Ramayana points out, Rama is a virtually perfect man. Do you find him less interesting than other heroes on that account? What indications are there in this portion of the text that his perfection may not be totally innate, but a state of being that he must work to achieve? How would this mirror the efforts we see his mother, Kausalya, make to discipline her feelings? How would that be consistent with the Hindu religious beliefs that imbue this work? 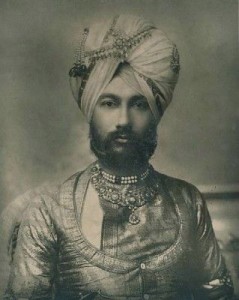 The perfect man, Rama, is not entirely without blemish.   He lusted after the colorful deer as well, I think.   “In fact, Rama was curious, too!”   The way this is written, assuming the use of the word “curious” is the same in both circumstances, suggests that Rama is as smitten with the deer as his wife Sita is, though he is less vocal about it.   Like Adam in the Garden of Eden, he goes for the incognito mode, supporting the woman in folly instead of stepping right out in the line of fire.   “And so, he took Sita’s side and said to Laksmana: ‘It is beautiful…” (Norton, 742)   I can almost here the manufactured offhand tone, (well, she has a point I guess.   I do suppose I could go after it…). 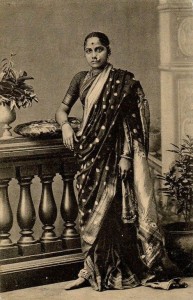 The shape changing deer incident, Rama’s harsh words to Laksmana after Sita has gone missing, and the struggle Rama goes through to contain his grief over Sita’s disappearance all suggest that Rama must work at achieving his state of “perfection” and divine beingness (creation of word, mine).   Rama’s family all show restraint throughout the story, the women being forgiven this “weakness” and the enlightened warrior king, Rama expects Laksmana to not stoop to this.   The efforts Rama makes according to his devotion to dharma do mirror the teaching in the Bahgavad-Gita.   Although he does not appear to suffer much hunger or grief over his animal skin clothing, his attitude is exemplary throughout most of the tale.   Actually, he seems to treat it like an English country gentleman might.   He demonstrates a man who is of “disciplined action” and strives to be the highly controlled man described in the Gita, “When these cannot torment a man, when suffering and joy are equal for him and he has courage, he is fit for immortality.” (Norton, 768) 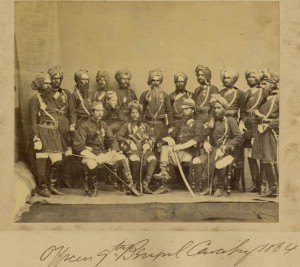 English and Indian Officers of the 9th Bengal Cav. in British service. A relationship of mutual admiration which for some regiments, continues to this day. https://www.pinterest.com/pin/175147872979925569/

I found all of this both difficult to read, (its not really my thing) and yet, an interesting tale.   I was really irritated to find that we skipped a lot of the tale between the dead eagle and Rama’s battle with Ravana, who didn’t add up to much more than Goliath.   True to my own character, and all kidding aside, I liked Laksmana’s character best.   The whole thing reminded me of an Kipling adventurer with his Punjab sidekick, loyal to the last.   I wonder, did the people of India serve England so long, without too much complaint, because of these teachings?  In the time the British ruled India, there developed true affection between the men who served the British and the Englishmen who ruled over them.  (That is not to diminish or justify  the cruelty that took place in that era).  Or was it because the English gentlemen were similar in “good manners” to the ideal? Just thinking…

2. In The Bhagavad-Gita, Krishna speaks to Arjuna, a warrior afraid to fight: compare Arjuna’s dilemma with that of Achilles in the Iliad, or that of Medea as she struggles with her maternal emotions when she is about to kill her sons by Jason. Compare the code of behavior Krishna outlines to the view of violence in Homer’s poem or Euripides’ Medea. If appropriate, look for materials in other belief systems that reflect on these questions: consider “[The First Murder]’ (Genesis 4), the Beatitudes (Mathew 5), or “The Offering of Isaac,’ or the table (Sura 5 of the Koran).

“Be intent on action, not on the fruits of action” — Bhagavad-Gita 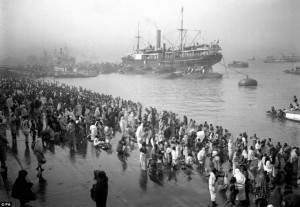 “When he sees identity in everything, whether joy or suffering, through analogy with self, he is deemed a man of pure discipline.”   Photo from an unknown source.   Known to be of bathers in Calcutta, during the days of the Raj.

Arjuna, the warrior, mindful of the dharma (spiritual duty) and also of the unpleasant conditions brought about by evil-based actions, (Kharma) is not so much afraid to go to battle as he is reluctant to engage kin in battle and have their blood on his hands. In other words, he is trying to reconcile having to make war upon his relatives and is asking, “how can this be?” How can a warrior, mindful of dharma, kill his relations in battle and not suffer bad kharma over it?  This is not the same dilemma that Achilles struggles with.  If anything, Madea and Achilles have more in common as both of them kill their relations, or allow their relations to suffer loss, based on their own vengeful pride and resultant anger.  Arjuna on the other hand is struggling only with what is right and wrong, in relation to his own destiny and as it applies to his heart.  At first reading, I felt that he was only concerned about his own future when it came to kharma.  But on re-reading the First Teaching, I realized he states quite clearly that he is loathe to cut down his kinsmen for all the normal reasons, he’d rather die himself.   “Krishna, I see no victory, or kingship or pleasures.  What use to us are kingship, delights, or life itself?  and “…I do not want to kill them even if I am killed, Krishna; not for kingship of all three worlds, much less for the earth!”   This too, is unlike Achilles and Madea, whose actions are entirely based on their own benefit, (except Achilles reaction to Priam).  Arjuna’s character is far more “heroic” in the classic sense than those of Achilles and Madea who arguably may or may not fit the hero context.

“Be intent on action, not on the fruits of action;   avoid attraction to the fruits and attachment to inaction!”   Photo by Marc Riboud, Gange, India.   1956

The description of the man whose insight and thought are “sure”, is an appeal to function in life free from the guilt or fear of our own actions, especially when it applies to the role we find ourselves in our society.   Sin appears here as the failure to use action, when action is a duty, “he who fails to keep turning the wheel here set in motion wastes his life in sin, addicted to the sense, Arjuna.” (Norton, 773).   Krishna is advocating “action” as a means to keep the three worlds whole.   “there is nothing I must do, nothing unattained to be attained, yet I engage in action”.   (Norton, 773).   On the surface, Jesus’ appears similar.   He is teaching that actions, or “Good works” as they are known in the New Testament and in the Koran, avail a man “nothing”.   Its what is in the heart that counts.   Concerning killing, as in Arjuna’s dilemma, Christ states, “You have heard that it was said to the ancients:   You shall not murder.   He who murders shall be liable to judgement.   I say to you that any man who is angry with his brother shall be liable to judgement; …”   (Norton, 891).   Christ is saying that murder is not only an action, but the thought behind the action, and even the thought without the action itself.   The heart is what is sinning and therefore no man is without sin. 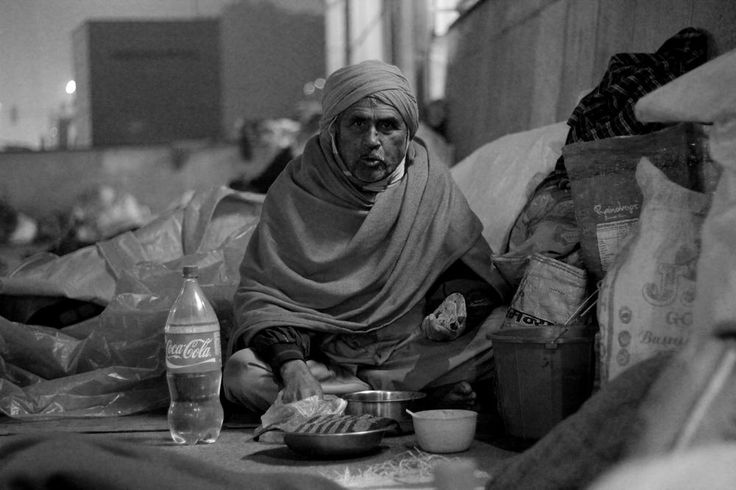 “Good men eating the remnants of sacrifice are free of any guilt, but evil men who cook for themselves eat the food of sin.”   Per Krishna or Christ, this man may continue to hunger all his earthly life.   According to Krishna’s teaching, if he succeeds in rising above his suffering through action and discipline, then he will be free from sin.   In Christ, he need only accept Christ as God and his sin is forgotten, his eternity will be free from want or suffering.   https://www.pinterest.com/pin/334181234821813571/

The difference here is that the heart is sinning, the law is impossible to keep.   That is why Christ must die, to atone.   In Krishna’s version of things, the sin is the lack of “action”.   The law or teaching can be kept by a man whose “insight is sure” and who is a man of “discipline”.   That is why actions are separated from desire or pleasure.   So if my “duty” is to make men suffer, for what ever reason, I am able to do so, without fear of bad karma in life.   But if I fail to “act” on my duty, I am inviting it.   What a dilemma.   Arjuna does not want to kill his kin, but it is his duty as a man, whose station in life is a warrior.   Likewise if it is your duty in life to sweep cow dung in the streets, because that is what you were born to, you best keep doing it.

3 thoughts on “Rama and The ‘Gita”