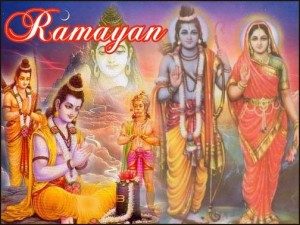 In each epic we have read thus far I have come to realize that even though each person that is named as the hero is different, it doesn’t mean that they are any less of a hero. Also, in each epic it seems as though every one of these heroes was described as the perfect man. Saying Rama is the perfect man doesn’t necessarily make him any less interesting, quite the contrary; it can make him just as interesting as the other heroes. While it says that he is the perfect man there are indications that he is only a perfect man by working to achieve that status. Compared to the other heroes Rama has a different sense of being and way of living. He lives by a totally different set of codes compared to the warriors and other people we have read about. Rama’s point of being on Earth is to follow the way of dharma, which is the religious and moral law and code of righteousness that will allow him to be accepted into Heaven. This sort of belief is reminiscent of Job working to do God’s will, Rama’s beliefs are just in a different place. One good example of Rama working to be a hero is right in the beginning of the story. When Rama is told that he must go into the forest and people object about this exile the story goes “Rama, devoted as he was to dharma, spoke: ‘Among our ancestors were renowned kings who earned fame and heaven by doing their father’s bidding. Mother, I am but following their noble example,’’ (731). While the odds are great that he would rather not live as a hermit in the forest for 14 years he accepted this exile as his duty because of intensely he follows dharma as his ancestors have for many years. He is working to earn his way into Heaven. He is the perfect man because of this work that he is doing to be accepted to Heaven, because it is the righteous thing to do.

The answer to the question about Kausalya mirroring her son’s efforts to discipline her feelings can clearly be seen in the same situation where the quote above comes from. In the beginning after hearing of her son’s fate she tries to guilt him into staying by saying “If, as you say, you are devoted to dharma, then it is your duty to stay here and serve me, your mother,’ (731). Then after listening to her son speak she eventually concedes and says “I shall eagerly await your return to Ayodhya, after your fourteen years in the forest,’ (732). By disciplining her feelings as her son has, by accepting his fate to go into the forest for those fourteen years to stay in the path of dharma, she also stays in the path of dharma by respecting her son’s wish and just waiting for him to return.  The Hindu religion basically revolves around the belief of dharma. By following this religious and moral law or code of righteousness, one can be accepted into Heaven for they have done God’s will and lived a righteous life by following orders and living life to the fullest. 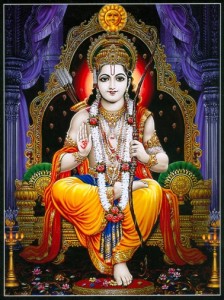 4 thoughts on “Living Life By Dharma”