1. How do Islamic perceptions of Heaven and Hell differ from those of Christianity and Judaism?

“And when he drew near and saw the city, he wept over it, saying, ‘Would that you, even you, had known on this day the things that make for peace!   But now they are hidden from your eyes.” Luke 19: 41.   A city of three religions. Photo public domain.

Heaven and Hell in the Islamic Koran appear similar in description to the Bible on the surface.   They are the destinies of souls of similar ilk, however, in looking a bit deeper, they are ideologically very different.   The Koran speaks of “flowing streams” in eternal gardens, with the righteous, having attained heaven through good works, clothed in fine robes and garments, sitting about on cushions and eating lots of figs and grapes.   Heaven in the Bible is a specific size, measured in cubits, paved in gold, with mansions, prepared for Christ’s people.   Hell, like in the Bible, is a place of fire, involving very deep pits.   Rather uncomfortable.   Significantly of course, is the mention of differing degrees in the Hebrew and Islamic versions.   In “55. The Merciful”, the Koran even lists some of the specific terrors waiting there for the unbelievers and throughout its pages there are consistent warnings that express god’s punishments are severe.   Christianity on the other hand, says little, mentioning only a “Lake of Fire” reserved for Satan and his angels.   Damnation in the Christian theology is eternity alone, in torment away from Yahweh.   The key point here is that everyone agrees, we are eternal beings and when the Day of Judgement, or the Last Day comes, we will all get our due.   In Allah’s eternity, the workers of good deeds shall receive rewards.   In Christ’s eternity, those who believed upon Him, and excepted His mercy will receive rewards, which they will cast at His feet in adoration, dwelling with Him and worshiping Him forever.   Both picture an eternal rest, yet its purpose is different.   With Allah, there are rewards to be enjoyed for good works, pretty straight forward.   With Yahweh, good works are simply not enough, compared to His pure light.   The sole purpose of eternity is to be in His presence, which glorifies Him and is so gratifying to those saved, it cannot be fathomed yet.   Christ described it as a banquet, where those invited made excuses, choosing not to come, so “the poor and crippled and blind and lame” were brought in (Luke 14:15-24).   Please count me among the poor and lame, as I would like to attend the banquet.

2. Although Jesus was a Jew, the religious institutions created in his name proved difficult for Jews to embrace but attractive to Greeks. What elements in the Nativity and the Passion narratives seems particularly and culturally familiar to a pagan audience?

The Nativity and the Passion are not accepted by Judaism, which is ironic, for both events do fulfill their own prophetic writings (Isaiah 52 – 53) just to point in the right direction.   Christ’s lowly birth, as it historically took place was a match to the predictions of the coming Messiah’s birth (1 Sam. & Malachi 5).   Christ’s death, although not   what the Jews expected of their Messiah, also matches prophesy, especially in the noted chapters in Isaiah.   There is little in this that matches pagan experience or would be attractive to Greeks, except that they were accustomed to the idea of many Gods, the God’s having “sons” and the idea of a God-like man.   Christ’s virgin birth may have actually been more palatable to Greeks than to Jews when one considers that heroes like Achilles were said to be born of Sea Nymphs and the like.   A virgin birth to an otherwise “proper” girl, might appear very acceptable.   Christ’s birth right to Israel’s kingship would not have been a particular point with Greeks, except that there is a “Hero’s” story there, especially with the resurrection and returning to bring a treasure (the Gospel) to all men.   While Christ’s character of humble, silent, lamb to the slaughter is not very pagan, but something new altogether.

3. Jesus claims the redeemed sinner is more precious to God than the righteous person who never sinned. This implies a conception of God unlike that found in the Old Testament or in The Iliad. How does this emphasis on human repentance and divine mercy change human relations to God? What different aspects of the divine/human relationships were emphasized in Gilgamesh, or The Iliad?

Mel Gibson’s, “The Passion of Christ” is horribly gory, but its portrayal of what the man named Jesus suffered is nonetheless, historically accurate. The scourging that Pilate ordered was intended to be brutal and humiliating, enough to kill even without crucifixion.   What kind of God submits himself to such a thing? A very different one.

Among the world’s religions, there is no other where the Creator of All Heaven and Earth, takes it upon himself to take the form of his creation, live among his creation,   allow his creation to destroy him, then having removed the barriers to communion, invited that same creation to share Eternity with Him.   There is no parallel anywhere in humanity’s record.   The essential difference here is not that a redeemed sinner is more precious than one who has never sinned, for according to the Bible, there is no one without sin (Romans 3:9-11), but that our debt has been paid and we must only receive this gift of salvation bought for us by this sacrificial act of the God-man.   Humanity’s blood price paid.   What kind of god submits himself to such a thing?   A very different one and one I wish to know.   Every other God vs. Man arrangement in the human experience requires some form of good work, divine path, or exalted, righteous or monkish lifestyle that is all but unattainable. 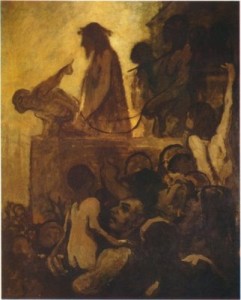 Followers of Christ are not required to do anything like that according to the Gospel.   The standard set by the “Ten Commandments” or the “Covenant”, are impossible to keep.   Christ illustrates this as he mentions that even having ill thoughts is enough to cart you off to hell.   Better to gouge out your eye and chop your arm off!   The harder men strive and work at the works, the farther away they become.     Like the “hypocrites” mentioned in “The Sermon on the Mount” (Norton, 892). Christ brings a new covenant, initiated by his sacrifice and resurrection.   They must simply believe.   It is a gift, and a gift is not earned.   This is the definition of “divine mercy” and is perhaps the stumbling block for those who strive to be righteous.     For how can a man, covered in sin, be more precious than one who has devoted himself to good works and righteous living?

In my opinion, the god’s in the Illiad and in Gilgamesh are so lacking in greatness and majesty, I hesitate to confer on them such an exalted title. There is no comparison to the description of the   Hebrew God in either the Old or the New Testament.   Yahweh’s own name is far more majestic than any name I’ve ever heard.   Just think, “I AM” (Meaning no beginning and no ending, always having existed).   I think its fascinating that in the Greek language, Christ’s words in the Garden “I am he” indicate the same reference to deity.   In the next sentence, those who came to arrest him are knocked over, “they drew back and fell to the ground”   (John 18:5-6).   The several god’s mentioned in relation to the flood story in Gilgamesh are weak in comparison.   They strive against each other.     They are not troubled by man’s evil, but by his “noise”.   This is similar to the irrational irritations that the Greek gods suffer from.   Squabbling with each other, tempting and tricking mortals, competing with each other to push their hero to victory.   They appear petty and small.   Yahweh’s not willing to share his glory with anyone.   He enters into no petty quarrels and suffers no foolish behavior.   His domain is his alone, he shares it with no other god.   Further, unlike the god’s striving to “humanize” Enkidu through sex with a harlot. Such things cannot be in the presence of the God of Abraham.   Were I a disinterested party, I think “I AM” would get my vote.