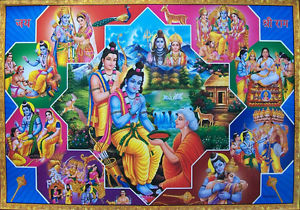 1. Heroes come in many shapes, sizes, and economic backgrounds with Rama being no exception. Rama is described in the head note as being the perfect man, in other words that he follows ‘dharma’ the code of righteousness and the moral law. I found that this makes him just as interesting as other heroes because like so many others he has a set code which he lives by. This code or the claim that he is perfect does not exclude him from having emotions, thoughts of despair, love, and honor even in the face of adversity. What this claim does is set up a guide of how a man should be like Rama, to be able to put oneself above petty emotions and only seek the betterment of society as a whole (forego your ego), and act out of honor.

Rama’s perfection is not innate or completely intrinsic. In Aranya 65-66, Laksmana reminds Rama that his nature cannot desert him and say “pray, do not go against your nature’, when Rama wants to pick up his weapons and act out of anger at the despair of loosing Sita. Laksmana beseeches Rama to regain his composure, even though it is natural for grief to hide wisdom, he reminds Rama of the type of man he truly is. The anguish Rama goes through at the loss of Sita gives the reader a way to connect to the hero, to have empathy with the God Visnu in his human form as Rama. It shows the reader that if a god can have such conflicts it is okay for a mere human to also have doubts as long as the person is able to find the balance of dharma, rein in emotions and act out of righteousness. Rama’s mother, Kausalya, is also affected by emotion and wants to stay with her son in Ayodhya 24-25. In this case it is Rama who reminds her of dharma and her responsibilities as a woman and wife. Just like Rama she accepts her situation and does what is right and holds to honor. 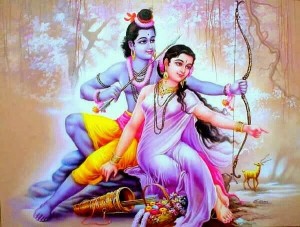 The Hindu beliefs are strong in the Ramayana. Each aspect of man and woman are represented in their higher forms. The form each believer is to achieve and work toward through reincarnation. Every character is seen to let ego rule if only for a short while. Sita is overwhelmed with desire for the deer, Laksmana wants to overthrow his father’s will about the hermitage of Rama, Surpankakha the demoness and her brother Ravana are consumed by lust and act out such desires, it is as if all passions are found in the tale. For every passion represented there is a response that enlightens the reader to the honorable path. For the Hindu the Ramayana is like a self help book, showing the way to higher reincarnation and truths. Every human faces trials and this inspires Hindus to seek dharma in all circumstances. 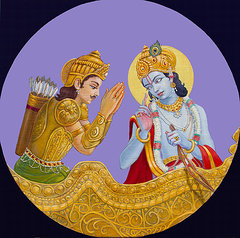 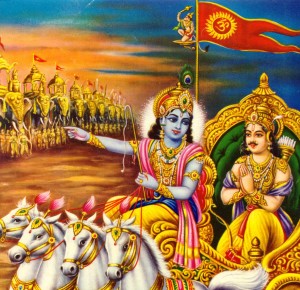 Arjuna in the third teaching asks Krishna if he thinks understanding is more powerful than action why does he still urge Arjuna to fight. Krishna states that a man cannot escape action by not acting. Action should be performed as sacrifice. It is sinful not to act, because each person has a part to play and a standard to set. Act with dharma, for nothing is obtained without action. Krishna tells Arjuna to be a man of discipline (a yogi) for others to follow. This code toward violence is different than in Madea or the Iliad. Here the idea is to follow your path toward enlightenment and lead others on their path as each is reincarnated, infinite and undying of soul. In the other works they worked toward honor of self or revenge; not toward a higher purpose – the betterment of the soul. For one’s soul to learn it must experience all passions in life (lives) to reach the highest level, this includes violence. Krishna taught Arjuna if he acted out of righteousness then there was no evil being done. Sometimes bad things happen to bring about the good and shine light on the path of wisdom and truth. The idea of honor and doing acts you question are found in many tales, folklore, and religious text; in most cases it is a test of the character’s moral code and willingness to put aside their own desires for what is asked of them. Not all heroes are up to this challenge for honor, righteousness, and discipline take many sacrifices to achieve.

2 thoughts on “Dharma and Life”