1. Madea is a woman, but Euripides has presented her as a figure previously thought of as exclusively male–a hero. Analyze her character in the play with that of Achilles, and conclude with a judgement on whether or not you think Medea is a hero and why.

This may be the mother in me talking, but I do not care how much one would be hurt by their loved one marrying another, murdering the children that are shared between the two of you is in no way excusable. How does that even come across as okay, regardless of this culture or that culture at the time? There is no way the strongest feminist could ever convince me to remotely associate the character of Medea with the word, “hero” or any other adjective that could possibly make her seem anything other than what all the other characters in the book called her, EVIL! And I am just telling you how I really feel. 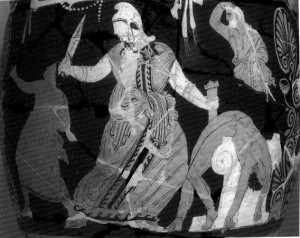 As for the similarities between Medea and Achilles, I could see personality-wise how one may correlate the two. Medea and Achilles both feel like they are owed something, both are overly prideful and their actions are both based majorly off of their emotions. Achilles was ready to give up his troops all over a girl and Medea was ready to kill everyone! Her children and the new bride of the father of her children. When in fact, on the lesson page of this discussion it says their relationship was never secured by law anyways. She was just a crazy woman who had the help of witch craft to do her disastrous ways.

For myself, personally, I cannot see the hero’s journey in any shape or form. Maybe the beginning one, the call to adventure, when she finds out about the wedding and she has to be exiled, but it is all down hill from there! Exile her, but do one better if you know a woman who has the personality traits of Medea, evil and smart, escort her out in chains!

2. Job (in chapter 31) makes the claim that his life has been virtuous and devoted to the worship of God, and so he does not deserve the calamities that have fallen on him. He asks God for an answer, but the voice from the whirlwind does not deal with his question at all. Why does Job accept God’s assertion of divine power (42) and not press for an answer to his question? Why is he satisfied with what he is given? Do you find the end of the dialogue satisfactory? 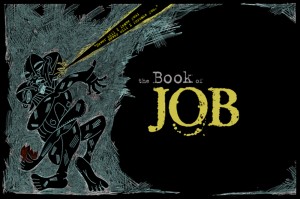 Job was always loyal to God, so in a natural, human reaction when bad things start to fall on him, he can not figure out why. Has anyone ever heard of the saying, “God’s favorites have a hard time,”? Not saying God has favorites, but I am sure you get where I am going with this. I mean of course Job has no words to say after even the third sentence of His answer, “Where were you when I founded this earth?” Like, that would seriously cripple every question I had ever asked of Him. I would be so quiet, plus could one imagine the power and strength behind His voice, even within the wind? Gah, chills.

After Yahweh has done more than answer what Job was asking, the ending says,

I knew You, but only by rumor,

My eye has beheld You today.

I retract. I even take comfort

for dust and ashes.

Wow. Job was truly satisfied with the answers he had been given, but who would not be? I love the ending of the dialogue. After Job’s suffering, he was blessed with thrice as much as had before and lived until 140 years old. The two that were not loyal to Yahweh had to give up what they had to Job and ask for him to pray for them.