1. Madea is a woman, but Euripides has presented her as a figure previously thought of as exclusively male–a hero. Analyze her character in the play with that of Achilles, and conclude with a judgement on whether or not you think Medea is a hero and why.

I remember this poster from the library years ago, I wondered what the story was. No that I know, I think it portrays Madea’s character very effectively. Alluring, dangerous, cunning and tragic. Photo in public domain.

Euripedes has indeed shown Madea as the tragic hero in his play, although the character is not on the “Hero’s Journey” exactly and the term should perhaps be applied rather lightly.   She is the main character, she is the dominant personality in the story and the rise of intensity in the story builds to the climax around her actions.   However, as for being imbued with traditionally “male” qualities, I disagree.     I think Madea is very much a woman in thought and action.   I don’t consider anything about her behavior to be overly man-like, but the opposite.   Women can be very skilled, very independent and very resolute.   Maybe these are attributes normally accorded to males in Greek tradition, but I think that is assuming to much about something written so long ago.   Her actions, like Achilles in Homer, are initiated out of a deep sense of injured pride and honor.   A women like Madea does not strike me as the type that is likely to find herself defenseless and homeless for long.   She is too cunning and self-reliant for such fears to hold her back for long.   No, her motivation is injured pride and in that, she is more like Achilles than in any other way.   Like the Greek warrior, Madea has a horrid temper which carries her farther perhaps than rational thinking would allow for.   In lines 105 – 115, she gives voice to her injury, and the nurse, listening, expresses a knowledge of her mistresses’ character flaw, “In that cloud of her cries that is rising with a passion increasing.   Oh, what will she do, proud-hearted and not to be checked on her course, a soul bitten into with wrong?”   And like the famous warrior, Madea’s rage is taken out on members of her own close circle.   Achilles called to Zeus to strike the “Greeks” (an inclusive group that he belonged to), and Madea expresses hate of her own children, revealing a mind that perceives not only husband but anything involving the husband as the target of her anger.   She cries, “Ah, I have suffered what should be wept for bitterly.   I hate you , children of a hateful mother.   I curse you and your father.   Let the whole house crash.” (114)   The nurse continues to outline the fairly psychotic anger Madea gives herself over to, “…Great people’s tempers are seldom checked, dangerous they shift from mood to mood.   How much better …”   (120).   Madea also shows herself like Achilles in that her chosen method of triumph over her enemies goes beyond mere defeat, but having vanquished with poison, she chooses a poison that is particularly violent and its method of application so vicious that others are sure to fall with the primary intended victim.   She goes overboard.   Her children’s sacrifice, are a last act of vicious hatred, murdered to “rub it in” to Jason’s pitiful character.

Although there are certainly a few hallmarks of the Hero’s Journey such as the “Call to Adventure” and the wizened mentor, guardian (the witchcraft and sorcery available to Madea), she is not bringing anything to her family or society for its betterment and she is not in the end, a re-born victor, but simply a further degradation of an already horribly flawed character.   Euripides may have used her as a tragic heroine, but Madea fails to qualify for “hero” status.

2. Job (in chapter 31) makes the claim that his life has been virtuous and devoted to the worship of God, and so he does not deserve the calamities that have fallen on him. He asks God for an answer, but the voice from the whirlwind does not deal with his question at all. Why does Job accept God’s assertion of divine power (42) and not press for an answer to his question? Why is he satisfied with what he is given? Do you find the end of the dialogue satisfactory?

In reading Job, one tends to get lost in the arguments, then when you finally reach the end and find Yahweh’s reaction to Job, it is so clear what He is saying, it seems almost overly harsh and clearly whirlwind like.   I have a mental image of the four men hunched over the fire pit and the blast of God’s voice is like a sudden gust of wind (but more intense), flipping over the kettle and their beards are flapping up in their faces from the blast. 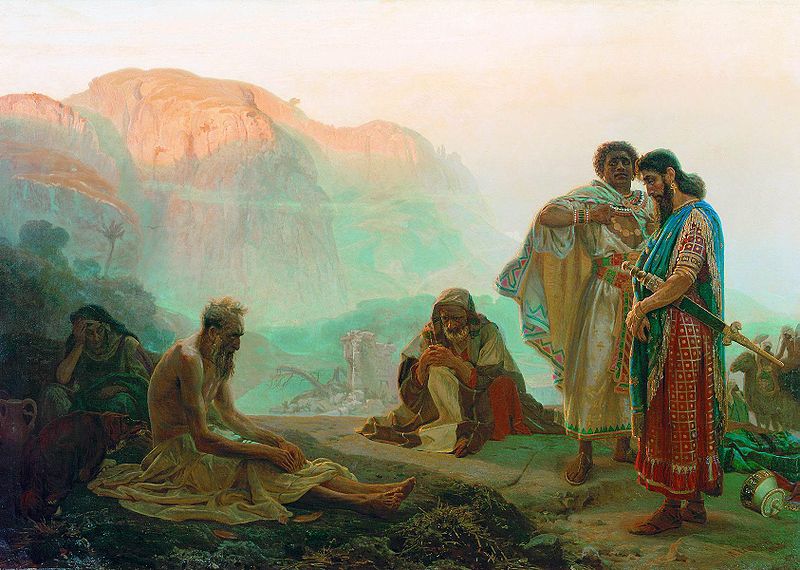 “Job, how long are you going to go on like this?” Nothing quite like the help of understanding friends! Photo pinched off the Internet.

Job’s mistake is not being unrighteous, nor is it that he deserved the affliction he has received or the suffering he has had to bear for his losses.   Yahweh never actually takes him to task over his questioning.   Job has actually clearly staked his claim in Yahweh’s camp, several times throughout the book, stating the rightness of God’s character and sovereignty in all of creation as its author.   Job’s request to God, as the one who “numbers all my steps”, is to know his wrongs so that he may account for them.   He longs to know what he has done.   For in his debate with his three friends, he not only maintains his innocence, but defies the idea that just because someone is suffering does not mean they have done something to deserve it.   This leads him to say   “If my step has left the path, if my heart has obeyed my eye, if anyone’s goods have stuck to my palms, may I sow for another to eat;   may my offspring be uprooted…” (Job 31)   He continues on in this vein.   His real mistake is not his question of not what have I done wrong, but in implying that there must be some mistake,..This implication is made through too much assumption about what is seen.   “I know how your mind works…” (10)   Yahweh’s reply is, “Who dares speak darkly words with no sense?”(38)

I like Yahweh’s next comment, …”Where were you when I founded the earth?”   (I love that!), and “Speak, if you have any wisdom:   Who set its measurements, if you know, laid out the building lot, stretching the plumb line?” (38)   Clearly Job has tapped into deeper water then anticipated.   Yahweh helps him see this in two basic thought lines;   “Can you explain the Universe?”   and “Do you understand right and wrong as much as you think you do?”.   In both cases, Job is pretty much gobsmacked.   He very humbly accepts that he is way out of his depth and although Yahweh does not directly answer Job’s question, Job gets an answer, so he shuts up.   Yahweh is saying that even though Job has made observations about God, he doesn’t understand what he doesn’t see.   There is much more going on than Job is privy to and this has led him to imply that God has used poor judgement.   This is clearly the only thing that God chooses to bring Job to account for.   “Would you really annul my judgement, make me out to be guilty, and put yourself in the right?” (40).   Now, if I were to have such an encounter with the Creator of all things, I think I would shut up as well.   I’m impressed that Job has the courage to even mutter a reply.   I don’t think I could do that.   It strikes me that it would take an insanely arrogant individual to speak out against a god that has made himself physically apparent in such a way.   Achilles and heroes like him were apparently imbued with such arrogance, but they were also dealing with gods that did not have the same credentials.   I think this encounter with God is satisfactory to Job because it is more than he ever expected.   God has told him that if you are going to take the Creator of All Things to court, you should know what you’re talking about.   Job gets it. 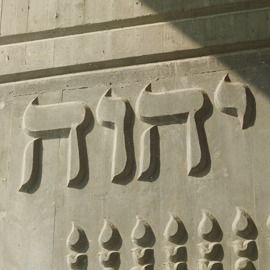 God calls himself ‘Yah’. The word means “I AM”. I think that is a fitting name for the god portrayed in Job.   It implies that there is far more to this god than man can ever know.

The dialogue ends very well to my mind, as the reader has endured man’s endless assumptions and diatribes about how things work or should be, and how God is and isn’t.   God sets the record of man’s grasp of the situation straight, then it finishes with Job saying, “I knew You, but only by rumor, my eye has beheld You today,.   I retract.   I even take comfort for dust and ashes”.   Job’s answer corresponds with what he has been told by Yahweh.   We are reading and analyzing this excerpt as literature.   However, I think that regardless of what one believes, if indeed such as Yahweh exists, what other reaction could you have?

7 thoughts on “Euripides Madea and The Book of Job”