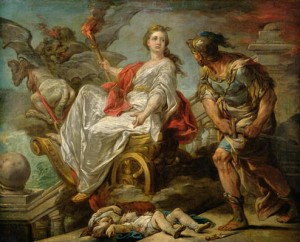 Medea and Achilles share the same emotional self-serving attitudes, although I would say that Medea was much more willing to self sacrifice to achieve her goals. Medea was more than willing to sacrifice her children in order to watch Jason suffer. However Medea’s character although driven to “madness” by seemingly understandable circumstances does not gain a form of redemption or forgiveness as Achilles eventually achieves.

As for whether or not Medea is a “hero” I must admit my first instinct given her background of killing her brother and betraying her family to be with Jason, followed by the murder of her children to make Jason suffer, I am inclined to say no. But that being said I gave pause as the play was a tragedy I should look at it from another point of view and I carefully thought of the play and it’s meanings, I believe that although Medea is no hero of mine that she is indeed the hero of this story. The entire play is focused on her, her blight and her obstacles she must overcome to accomplish her goals, and aside from the horrible murders of her children she presents a good moral belief that one should honor marriage and family. 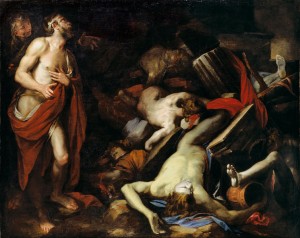 Job a life time of speaking/praying to a divine entity that has never responded to him, then to be suddenly “blessed” after all of these trials of faith by the voice of one’s “creator”,   Job must have been shocked, overwhelmed with emotional turmoil and confusion. Fear was probably a major factor in his acceptance of god’s power, a voice speaks to you from the wind saying it is your divine being with all the power in the universe do you ask it why when it seems to have been punishing you already for no reason? I think not. I believe the end dialogue makes sense with the setting of the story and the character involved, although I myself given my background would have thought I was losing my mind or someone was playing a trick on me, and asked lots more questions.