Achilles is very hot tempered and as the most powerful warrior in the Iliad, he makes everyone including his fellow Achaeans feel his wrath when he is upset. He feels like someone owes him something all the time and will automatically respond back intensely to someone he feels may be degrading him. Even though Achilles is super-human, readers look at him less than favorable, especially when he deserts his army ( and Hector is able to succesfully attack here ) because Agamemnon angered him, he puts his whole army at stake because of his pride. This quite different from Hector who stands beside his troops, like his brother, even when he is angry.

Hector is the most powerful warrior of the Trojans. He has a lot of similarities o Achilles, but his outlook on war and attitude towards people is quite different. Hector does not really want war and curses his brother, Paris for bringing it upon their home. However, he still treats him with love as he does everyone else. He is a very dedicated person to his wife and child, and wants to try to avoid war as much as possible but in the end, he becomes a very strong figure when he realizes there is no way around the war. Even when the gods say, “We’re done with you,” Hector still stands his ground.

When Hector killed Patroclus, Achilles anger was re-directed to him and all Achilles wanted to do was to avenge his friend. Both of these men were prideful and respected, respected for two different reasons, but still respected. 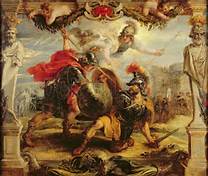 In Tim O’Brien’s The Things They Carried he talks basically about how war will make people to things outside of their character, good or bad. It breaks down a person to the extent it causes actions that are typically unheard of, all on the cause of survival and it resignates with that person long after. When Achilles killed Hector to avenge his friend, Patroclus, he dragged his body through out, even against their customs. When Achille’s seen Priam’s suffering the malicious animal that Achilles was portraying “caged” itself.   It was almost like he had an “on and off” switch that was triggered by the emotions of Priam. When Priam begged for the body of Hector, Achilles character changed and Hector was able to have a proper burial. This communicated, like O’Brien’s The Things They Carried every person has that threshold they can change during war, rather good or bad.

I feel as if this is two-sided. It could be mutually exclusive, it could not. It depends on the character of the person and of the family. If the family is alright with living in dishonor and chased from their home because of the un-warrior like actions of the solider, and all they care about is all of the family alive and together…then no, it is not mutually exclusive, especially given the time period we are talking about. It was highly frowned upon if the male of the family was not upholding the Warrior Code. However, if the family recognizes that was the male role and understands, “Hey, he might not come back at the end of the day, but he will die in honor,” I think they could be mutually exclusive. Yes, the Familial Code means taking care of your home and your family, but in those times taking care of family meant, bringing them honor which meant upholding the Warrior Code. It doesn’t mean, the soldier is home and alive. If the soldier died within battle, surely the family was taken care of after right? A sense of community for a hero.

2 thoughts on “The Iliad”