In the poem The Iliad we are told the story of the siege on the mighty Trojan city of Troy and the heroes that fought on the battlefield. First we have Achilles of the Greek Army, his relationship with his fellow warriors is like his overall attitude in life completely self serving. It seems that throughout the poem he is untroubled by the suffering of others around him and only worried about his own “honor” or “respect” as he thinks he should be paid, either because of his  military heritage or that he is the son of a “Goddess”. The comrades of Achilles both admire his fighting prowess as well as fear it in combination with his seemingly uncontrollable anger. On the other side of the wall we have Hector beloved son of King Priam and respected Trojan warrior and general. Hector throughout the poem is the opposite of Achilles in all ways with the exception of his fighting prowess. Hectors entirety seems to inspire loyalty in the Trojan populous, though self sacrifice in contrast to Achilles self serving ways, although Hector does share a flaw with Achilles. Hector like Achilles shows  that he like Achilles gets emotionally carried away, as with the cruelty he shows Patroclus  and his other victims. 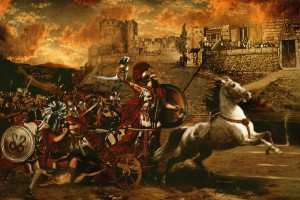 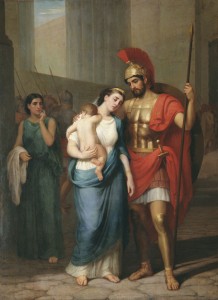 After “going berserk” and dragging Hectors body about Achilles is brought back “into balance” by the pleading of Hectors father King Priam. In my opinion this is a great example of what war does, it takes peoples morals, codes, beliefs and throws them out the window. When faced with life and death on a moments notices day in and day out people can become desensitized to it. Creating disconnections between themselves and their humanity and that of their enemies. This part of the poem is almost a form of PTSD and Achilles is forced into coping with actions that he has  taken(and the lives) as  well as those that have been taken against him.

A personal reflection, war is ugly, and a some points its not about killing the enemy but about surviving. War is emotional, comrades , enemies  falling before you, and back in these times it wasn’t yards or feet before you it was in your face with blade and shaft.

I would say the the Warriors code of honor and the code of  familial are far from exclusive. While the warrior code depends on honor and victory, the second responsibility for ones family(offspring, spouse, etc.) actually compliment each other in my opinion. The warrior code demands honor, and protection of ones family, their way of life, is the highest form of honor. Even now to fight for ones country, leaving family to fight overseas is seen as a position of honor and responsibility not only to ones family but the country one fights for.

2 thoughts on “The Iliad”