Hector was also favored by the gods, though born of human lines only, and revered by his fellow Trojans. He was renowned for his prowess in war, level headedness, full of honor and virtue. Hector is loved by those who follow him, and he gave all for home and country. Even in the gravest of situations he has kind words for Helen who with Paris is the reason behind the war. He is not shown to ever be harsh or demeaning. A statesman and family man, he fights out of obligation to home and family as son of the ruler Priam. Driving his actions are the welfare of others, honor, and security of those he treasures. Hector was the only force that had a chance to save Troy. He was the bright side of war.

Both men are the stars of each side. Both are the epitome of what a warrior should be, with strength and success on the battle field. Both are blessed and cursed with a short but legendary life. Both are victims of someone else’s action. Paris’s actions draw Hector and Troy in to the war, Patroclus’ decision to ignore Achilles and pursue the Trojans brought about his death and drew Achilles back into the war, ending with the death of Hector. Ultimately you could not have one without the other, for they each play a major role in the story. In another world they could have been fast friends like Gilgamesh and Enkidu, but not in the Iliad. Here they are drawn together, caught up in conflict and war, till one stands alone if only for a short time. 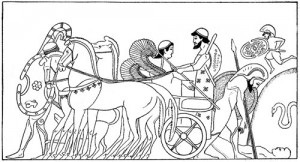 4 thoughts on “The Epic Iliad”