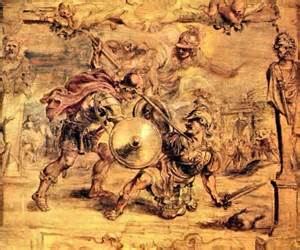 Hector and Achilles were two very different men who happened to be great warriors.  Hector fought for his people and for Troy, he was more selfless and compassionate.  Hector longed for peace but fought because he understood that the war was something he could not avoid. He was a brave but reluctant warrior who was respected by his people. His troops followed him into battle because they knew he was fighting for freedom and that he deeply cared for all the people of Troy. His troops fought for him because they respected his skills and the person he was inside. Hector was more approachable and was respected on human level.

Achilles was more of an egotistical, arrogant person and fights for his own glory. His fighting skills are great and his army follows him because they are in awe of him. His skill in battle would boost the morale of the troops. They respected his fighting skills but not the person he is inside. Achilles seemed to place himself above his troops and was not approachable. He was to be admired from a distance.

Along with the differences Hector and Achilles also shared some similar traits. Although Hector is more selfless and fights for a more noble reason then Achilles one similarity is the pride they both show. Hector shows his pride by refusing to back down and take his troops back in the Trojan walls, while Achilles lets his pride get the better of him when he refuses to help Agamemnon. 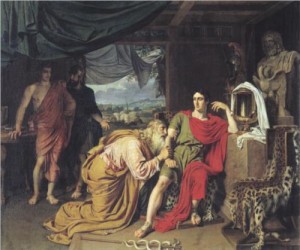 I believe that seeing Priam’s suffering over the loss of his son opened up Achilles to be able to see his own humanity. Achilles was able to see beyond his anger and rage and realize that everyone who had lost someone in the war was going through the same pain and anger. He also was able to be more compassionate when he thought about the pain and suffering his father was soon endure. Achilles’ ability to see this and have compassion for Priam lets us know that inside us all we have the same capacity to feel the sorrow and pain war and death causes.

3 thoughts on “Discussion 3- The Iliad”