1) I found The  Hero’s Journey Defined  to be an excellent synopsis of Joseph Campbell’s The Hero with a Thousand Faces.  Reading The Hero’s Journey Defined  allowed me for the first time to gain an understanding of what it is that we as moviegoers believe to be satisfying. We tend to all watch new films with differing plots and genres, but the one constant tends to be the pivotal-heroic figure. Joseph Campbell was able to break down the three phases of the Hero’s Journey that tend to common no matter the story: 1) Departure – this is the departure from one spiritual or physical realm to another, 2) Initiation – this is equal to the trials and tribulations which the hero must succeed in passing, and which distinguish himself from the ordinary, and 3) Return – the hero does not merely indulge selfishly in his attained level of enlightenment or conquests of pursuit, but instead shares his gifts with the people around him that are not on an equal status.

One film where I saw parallels to Hero formula was a film I saw a second time recently starring Jim Carrey called, Yes Man.  In this film, Jim Carrey plays the role of a man named Carl who is a divorced loan officer at a bank. Carl lives alone in a very subdued life for the sole reason that he is not comfortable moving outside of his own comfort zone. Because of this, his life, profession, and friends around him suffer. After attending a conference led by an inspiring figure who convinces Carl to say yes to everything, Carl’s life begins an incredible transformation.

During Carl’s transformation, he said yes to an opportunity to learn to play the guitar. After extensive practice, Carl was able to help save a suicidal man on a balcony.

This was just one example of Carl’s new found abilities. Also early in Carl’s transformation, Carl meets his goddess Allison at a gas station for the first time. As Carl continues his transformation, he begins to get closer and closer with Allison as well. 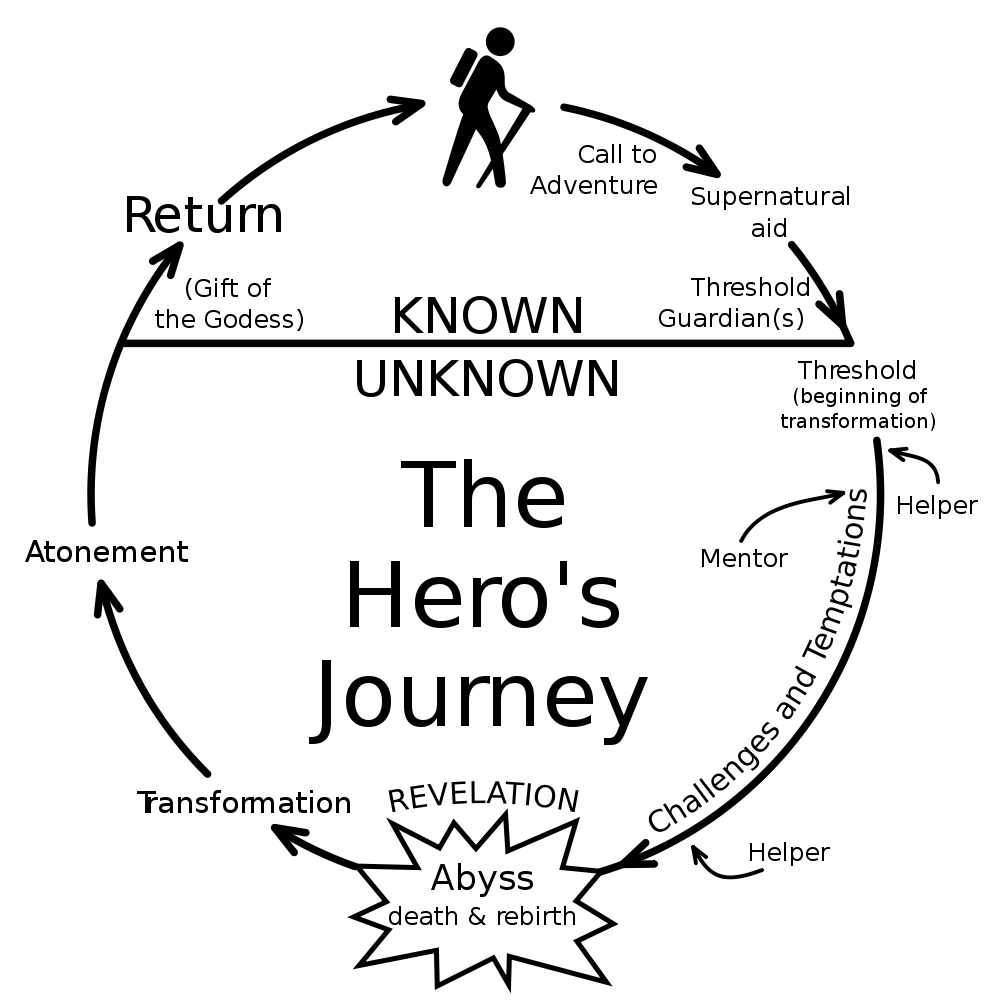 Here is where I see the movie,  Yes Man, departing from the model shown above. After Carl reaches a threshold in his relationship with Allison where he balks at moving in with her, his world begins to come crashing down. And his relationship with Allison come down along with it. Carl is motivated to meet his mentor/helper one more time. Carl’s mentor explains that it is not necessary to say yes to everything, only that it is necessary to do so early so that the person undergoing transformation, in this case Carl, learns it is okay to say yes sometimes, as opposed to no. With this new found inspiration, Carl is able to patch up his relationship with Allison,  as well as maximize his potential in life for his own betterment and for those whom surround him.

2) I believe that cinema can meet our human needs as expressed in the four functions of mythology, but I think of specific movies really only being able to perform well at doing this in a piecemeal fashion. As far as function of mythology number one, there are many current movies one could count on to fulfill this role. Movies like the Hunger Games, Divergent, and Lincoln  are all movies which are emblematic of human beings breaking free from the pitfalls of recognition between good and evil.

As far as function number two, the best movie I can recall (although not the most recent) is the movie Contact, with Jodie Foster. This was certainly a movie which allowed one to consider a universe which lay beyond the one that we as humans are exposed to on a daily basis here on Earth.

Function number three is where I tend to see a break with Hollywood from the norm. Movies today tend to focus more often I believe on certain societal problems and how they relate to other human beings. I believe many of these societal problems, such as global warming, war, Machiavellian business or political practices, etc., all tend to point the finger at the current status quo as being the problem. The problem we may tend to see when we look at these various problems which are pointed out is whether a particular problem has a current viable solution, and if so will that viable solution really serve to make people better off or possible worse off in economic or social ways. This is a tough question to answer because it is hard to measure comparable statistics when the impact of certain alternative practices cannot always be accurately predicted, and second and third order effects stemming from an action are often extremely difficult to contemplate.

3 thoughts on “The Hero’s Journey”