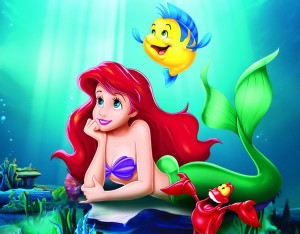 (1.)
I haven’t had time to sit down and watch movies for a long time, due to my busy schedule. I decided to think about my all-time favorite childhood movie, The Little Mermaid, and see whether or not it could follow the thread of The Hero’s Journey. In my previous teaching classes, we were always introduced new material using Disney movies, because they have so much hidden within the story itself. In turn, the Little Mermaid worked perfectly for this assignment!

I found that this movie has a very strong “call to adventure.’ Ariel, the little mermaid, discovers that there is a world above the sea. She wants to explore and see what the land holds. She has to helpers, Flounder and Sebastion. Her best friend, Flounder, is always by her side, excited to go on adventures with her. Sebastion, another close friend, is always there to help her with anything that she needs. Ariel faces a challenge when King Triton, Ariel’s father, does not want his daughter anywhere near the land. Ariel challenges her father. Next on her path, she meets Ursla, a very cruel sea witch, who takes advantage of Ariel. She makes the agreement that she will transform her into a human for only 3 days. If she steals a kiss within these three days, she will stay human. If not, she will turn back into a mermaid. Ariel has an amazing singing voice, who Ursla also steals in return for Ariel’s legs. Within the time of her being a human, Ariel meets a man named Eric. She falls hopelessly in love! King Triton notices that his daughter is not around the sea. He confronts Ursla, but is devastated when he can’t break Ariel and Ursla’s deal. Finally, after capturing his daughter, he notices how heartbroken Ariel is. King Triton transforms Ariel back into a human!

(2.)
I believe that current cinema sometimes meets the human needs expressed in the four functions of mythology. Many movies these days have the same plot line. Many times, a woman is stolen, goes through terrible things, and then is saved at the end of the day. Scary movies throw too much material at you, that do not mean anything within the story. Yes, they make you wonder and get people hyped up, but they don’t meet any mythological needs. They are basically just written for the type of things that we like to see. Yes, movies can meet the four functions of mythology if they are scripted from old literature. Older stories used to serve a purpose, nowadays, they seem to be based upon the same script, just with different characters and different areas.