1. Can you identify any of the stages of the Hero’s Journey in the story of Gilgamesh? You may begin by asking yourself: What is Gilgamesh’s Call to Adventure; or what is Enkidu’s? 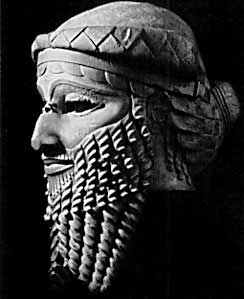 A Mesopotamian bust, purported to be the image of Gilgamesh. Photo public domain.

It seemed to me that the story of Gilgamesh took some time to develop the “Call to Adventure”.   The call really appears when Gilgamesh has already been grappling with Enkidu, who is responding to his own call.   Gilgamesh’s sense of self-greatness, draws him to combat the monster, Humbaba.   But he is not seeking to fight Humbaba so much as he is seeking to cut down a great Cedar tree, which the text notes, “Felling evergreens on distant mountains was a well known demonstration of kingly power in early Mesopotamia.” (Norton, 24).   This is the “Call to Adventure” that leads to fighting Humbaba, that leads to the door being made, which leads to Ishtar’s advances, which leads to Enkidu’s death and so on.   There are several other hallmarks of the Hero’s Journey stages.   The “wild cow” or Ninsun, represents the mentor, Shamash too, a mentor and a supernatural influence.   Humbaba, the Bull of Heaven, Ishtar, Enkidu’s death are all thresholds to cross, with the aid of these mentors. His “Abyss” is the moment of Enkidu’s death.   His transformation has occurred as he deals with the disappointment that is found in the moment he loses his chance at eternal life.   Leaving Utanapishtim, he is a different person, no longer so God-like, more like a common man, seeing his own frailties, his own destiny with death.

2. Do you believe any of the Four Functions of Mythology, as outlined in ‘Mythological Themes in Creative Literature and Art’, are alive and active in the story of Gilgamesh? Why or why not?

I do believe that the Four Functions are describing or perhaps defining, actual conditions within human existence and the “Myth” is a reflection of that common thread which makes our societies and civilizations “human”.   Campbell’s article, I believe is confusing and unnecessarily burdened by assumption.   I don’t find that things should be so complicated.   When the Four Functions are broken down into simple statements and their definitions, there is a clearer picture of what Campbell is defining.   It would seem that when a civilization creates a myth, even over centuries, with different authors, there is still a formula at work which runs true to similar stories in other societies.   This would indicate that when human beings tell tales, they do have needs they are trying to meet.   Answering the greatest questions of life, finding our place in society, defining our societies structure and giving voice to our greatest struggles in living out a lifetime, are some of our most important questions in human existence.   One might ask why we grapple with it so, if we are just animals?   Why do we want these questions answered?

3. What judgement would you make concerning the success or failure of Gilgamesh’s journey? For instance, he failed to return with the Plant of Everlasting Life, but what did he gain instead? Is it a worthy replacement for eternal youth?

Gilgamesh is an interesting study.   There are people in this world who have no sense of their own limitations, their own frailty.   At least, not until they meet their match and in a moment of clarity, they see their mortality before them.   Among soldiers, firefighters and police officers, or even among the most aggressive athletes there is this common trait.   Gilgamesh is such a man.   He finds no serious barriers to his will, no challenge that sets him back, until he faces Humbaba, and that too is overcome.   But when Enkidu dies in his bed, that unsettles him.   He is faced with losing life.

“Enkidu, my friend whom I loved, is turned into clay!   Shall I too not lie down like him, and never get up forever and ever?” (68)

So his goal to find eternal life is defeated, by his own human limitations.   Pursuit of Eternal youth has merely left him wiser and his time spent chasing the wind.   “I have done a good deed for a reptile.”   (81)   This is a gift in itself, providing clarity, appreciation perhaps of what lies ahead and the wisdom gained.

3 thoughts on “The Epic of Gilgamesh”