1. What movies can you recall–besides The Matrix, which was mentioned in the lecture notes–that follow the thread of The Hero’s Journey? When you cite your film, or films, be sure to judge whether or not you believe the general formula was appropriated well or poorly; and, moreover, describe a few scenes that match some of the stages of the journey, such as done in the video in the lecture notes.

The Hero’s Journey in Film

The Hero’s Journey, as laid out in the lecture, is easily recognizable as a familiar theme in popular story and in cinema.   There are several that jump to mind initially, such as Star Wars with Luke facing the now infamous adventure of overcoming the empire, guided by Obi Wan and then there is Tolkien’s Bilbo struggling against Sauron’s evil, with Gandalf as a guide. There are other films, however that, while not necessarily myth or fantasy, endeavor to tell their tales through the same tested formula.   In the film, “Ben Hur”, based on the novel by Lew Wallace, the hero goes through great trials as he follows the recognizable “thread” in the Hero’s Journey. 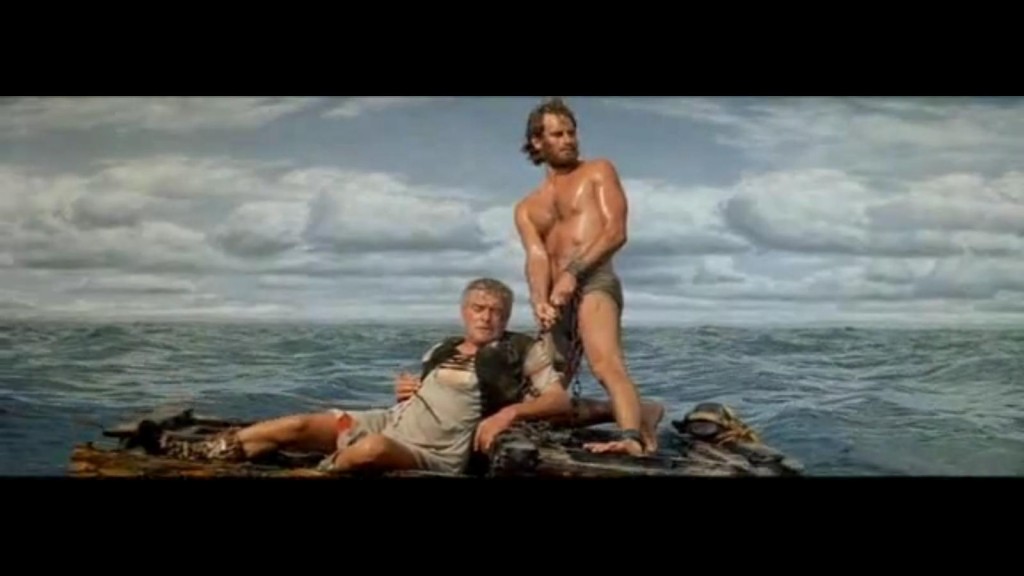 In the “Belly of the Whale”. Ben Hur, having saved his oppressor’s life, transitions from slave to adopted son, a restored Roman citizen. But this is only another threshold to cross, since he despises the Romans. Photo public domain.

Judah Ben Hur’s life is turned upside down when his family is betrayed by his long time Roman friend for his refusal to bow to Roman domination, a stance he chooses to take, a clear “call to adventure”.   Losing his family, his love and forced into slavery, Judah embarks on an adventure he does not choose, but which exposes him to several thresholds and the “Belly of the Whale”, a true “road of trials”.   A particular fit, is the sinking of the galley he is enslaved on.   Saving the life of the Roman takes him from slave to citizen and adopted son. Judah Ben Hur receives his first contact with his supernatural help. He receives water from the Christ, not knowing who he is at that moment. Photo public domain.

Alternately receiving guidance and aid from his Roman benefactor, whom he saved from death, and from the Supernatural in the implied intervention of God and God’s Son, the Christ, Ben Hur passes through slavery to being restored to Roman blessing.   A clear moment of “Atonement” he completely rejects for the return to his family and an “Atonement” with Christ which he finds miraculously at the end.   While not following the thread in its intended mythical detail, most of the key elements are present.   Even the Gift is not left out of the story as Ben Hur’s mother and sister are healed through Ben Hur’s return and willingness to take them to see the Christ, something they were incapable of on their own.   They are healed and in response so is Ben Hur.   The hero gets the girl in the end.

Another excellent match in a based in truth tale versus the myth genre, is the historical movie, “Glory”, the story of the 54th Massachusetts Infantry and the white officer who died leading them.   Among the first colored regiments in the American Civil War to win the respect of their fellow soldiers, the 54th Mass. suffered 40% casualties in the fight at Battery Wagner, on the Confederate Coast.   An unlikely setting for a “Hero’s Journey”, the story nonetheless is told, relatively close to the hero thread.   As an initiate to Civil War combat, young Robert Shaw is wounded in his soul by his horrifying battle experience, which in turn exposes him to the opportunity to serve his community as its representative, serving as Massachusetts first Colored regiment’s commanding officer. 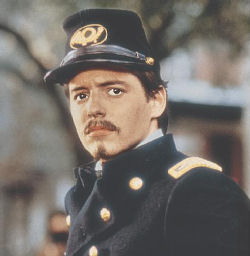 Robert G. Shaw, the reluctant hero in “Glory”. Faced with promotion to an unpopular position, he cannot resist its pull as a chance to accomplish something truly meaningful with his life. Photo in public domain.

A position fraught with social weight and enormous difficulties which the hero, Robert Shaw truly does not wish to accept, but cannot resist either.   The call to adventure, to be the one to lead free African American men into the fight for their own freedom is too much for him to resist.   Assisted and hindered by the truest of friends, hated by other officers, threatened with death if captured by the enemy, Shaw earns the grudging respect, then love of his African-American troops.   At first they are not privvy to the trials and thresholds he must cross in order to serve them; they mistrust the “rich white boy colonel”.   He must at times teach them roughly, for he fears what will become of them if he doesn’t.   He knows their reputation as a community of freed men is at stake.   They must do well in combat.   An unlikely mentor, the former grave digger and slave played by Morgan Freeman gives him the key to his   men’s hearts and he begins to win. 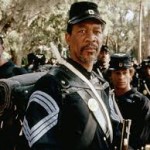 While the issues for Robert like, “atonement” and “supernatural” intervention have small places in this true story, the features of the hero’s journey that are present are very strong.   Even his metaphorical “rebirth” is present, as he emerges from his trials, a more assertive, intent driven man, bent on seeing to it that his regiment is given a chance to prove its worth and confident in their qualities.

As in the story of “Ben Hur”, Shaw’s “gift” brought back through his journey is the triumphant ending in this hero’s adventure.   Through Shaw’s willing sacrifice, setting the example for the men of his regiment to follow, his regiment suffers great loss, but achieves forever, the first chapter of the fighting reputation of the Black American Soldier.   A massive, culture changing gift.   In the lead up to the final battle scene, the 54th takes the place of honor, the front line, and as they move into position, the white soldiers, tired from four long years of fighting, cheer them on, “Give ’em hell, 54th!!” A moment of acceptance. For me, the most telling moment in the movie, is when Shaw receives the ultimate warrior honor, intended as a sneer by the enemy as he is buried with his own soldiers, the former slaves. 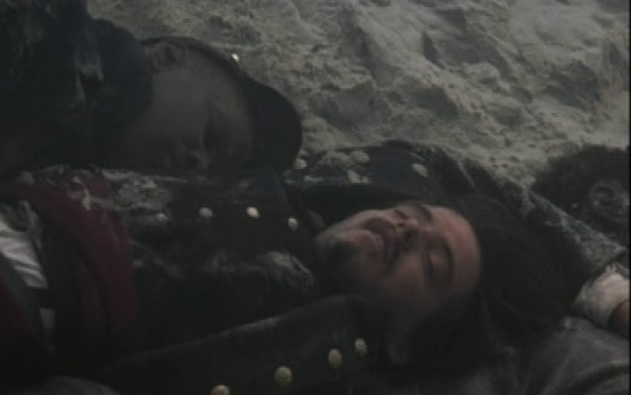 Shaw and Trip. Trip is the runaway slave-turned soldier who hates his white colonel, but comes to respect him and dies at his side. https://www.cinepages.wordpress.com

To a prejudice society, this was disgrace, but to Shaw’s father, it was the place of honor, signifying what his son had achieved.   Using artistic license, director Freddie Fields includes a touch of the “atonement”, as the most difficult soldier to win to Shaw’s cause dies at his side, wrapped in the flag he had refused to carry and comes to rest in the grave upon the breast of   “rich white boy”, colonel who invited him to fight for freedom.   Bear in mind, this movie was made at a time when some in the film industry were intentionally searching for role models and important stories in African-American history.   This is part of the American myth, showing young African American’s their place in our country’s history, their forefathers part in its shaping, not just being shaped by it.

Movies – Fulfilling the Role of Myths

The film industry probably did not start out to fulfill the role of taking on the mantel of the myth tellers in our society, but that is the burden they have come to bear.   As our society has moved from one of book readers and casual movie-goers to a large portion of the population raised in front of the television, the film industry has become the de facto storyteller of our oral history, as well as our baby sitter and morality meter.   Not to get off topic, there are many issues with the moral quality in film today, but there is no doubt that the norms in society are given birth to the masses through film.   Drastic changes to our cultural norms, as well as the intensity of violent behaviors and exposure to traumatic events are created before our eyes from an early age.   This has permeated our society.   Is it meeting the needs of our cultural myth’s, the functions myths perform?   They do, in all four categories.   The two films previously mentioned both endeavor to serve these functions.   Both address mystery, either in death or in healing.   Both show the viewer how members of society find themselves within the cosmos, either creating a place for themselves or having there place forced upon them.   Both heros must defy social norms and pay prices for doing so, which serves to inform the viewer that this is how things were, and how far our society has come.   And finally, both stories show the process of death, either through violence or through a change in life’s security as time passes.   These visual myths cross barriers that families are often not comfortable approaching.   They expose us to the mysteries and take us to places unimagined before.   The create pressure for social change and in particular, remembering the film, “Dad”, with Jack Lemon, they help us cope with the changes in life, even as we go from adult to elderly and finally death.   They serve these functions, and although film is a very powerful force in our society, the myth functions are not exclusively the realm of the film industry.   What an incredible responsibility to society.

2 thoughts on “Hero’s Journey in the Movies”