For my comparison to the Hero’s Journey, I have chosen “The Lord of the Rings” trilogy. I felt that the films spent a great deal of time covering the transitions of Frodo, the main character, as he fulfilled his destiny as the hero of Middle Earth and the formula for “The Hero’s Journey” was applied well throughout the course of the story. 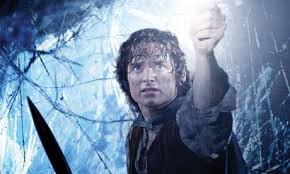 Frodo had many of the features that normally compose a hero described by Campbell’ formula. He had no known parents to speak of, he was male and a Hobbit (lowly birth) and he had no desire for wealth, fame or adventure. His intitial “Call to Adventure” came with the appearance of a ring, which was bestowed upon him to bear, by relation to the previous owner, Bilbo Baggins. This ring held the fate of Middle Earth and the inhabitants there of.
Frodo’s “Departure” of the story begins with his “Call to Adventure” and he must carry this ring a great distance to the Elves, in order to decide the fate of the ring. After some slight preparation, he leaves his “Threshold Guardian” Gandalf and joins with a few friends, which symbolized a few characteristics common to Hobbits that would bring challenges to Frodo, teaching him new aspects and giving him determination to complete his journey. Frodo’s “Supernatural Aid” comes through a variety of sources throughout the tale, but primarily it is the ring itself that works for and against him at all times through the journey.
“Initiation” comes to pass through many triumphs and some dis-heartening failures. The ring wraiths are constantly chasing Frodo across the land and almost take his life early in the adventure, but he survives at the help of an Elven Heir to Rivendel. This would normally strike such fear into a hobbit, but during a meeting of races Frodo views the ring for what it has done in history and how it tares apart those who desire the power of the ring with the greed in their hearts. This quality of Frodo, this selflessness, is the inherent strength of his people and the key to his determination and ultimate success in the story, which is why he steps forward and offers to carry the ring to the firey halls of Mordor. The “Ulitimate Boon” of courageous selflessness was shown by Gandalf early in the story in his refusal to take the ring for himself or to try and conceal it, knowing that the ring could corrupt even the heart of a powerful wizard. Throughout the story he shows courage and the sacrifice of his life at the hands of a Balrog, but is renewed a life as a white wizard, even more powerful than before because of the power that lied within his own heart. Frodo grows to gain this same characteristic throughout the story and stands up to those that would destroy all, giving up his own safety, freedom and the ring as it is dropped into the volcanoe of Mordor.
The “Return” of Frodo takes the form of a “Refusal of the return.” Frodo feels disconnected and segregates himself indoors often. Longing for the adventures of his previous trials and after all that he has learned, he no long keeps the inherent characteristics of a normal Hobbit. He chooses to withdraw, from the society that he was raised, to Forbidden Isle of the Elves, where no one is to ever return.

There seems to be a great disconnect between the cinema of today and and the needs of the four functions of mythology. A lot of focus is placed on the fourth function, that of the psychology, which does drive a story to have some interesting twist or aspect of introverted thought or perversion through our society (the third function). Many of the movies are created with such a theme or idea, that people can not relate to them, but only see them from the oustide and pass judgement, based upon prior experience. Many films avoid the first function, the mystical or metaphysical function, entirely in order to keep the content light. In the beginning of many films, the main characters feel set apart from society, which may appear to be an unaccepting barrier or organism and they are unable to fit in, but through the story many find themselves accepted by the whole or rejected completely for their rebellious view of society. Most films do have a general lesson to be learned, whether it is simlply teamwork, trust, or courage, which would fulfill the need of a transition in psychology. Movies can meet the needs of the four mythological functions, but few provide all of them in a single film, mostly due to the regurgitation of messages, short attention spans of the audience, focus on emotional or physical desires, or crude humor and lack of content.

1 thought on “A Hero’s Journey and the Four Functions”