Willow is a science fiction fantasy film from 1988, and one of my all time favorite movies from childhood. After watching Willow  for probably the four or five millionth time, I was able to discern  that it follows the formula of a heroes journey quite well. Although I did see that since it had the two main heroes as well as several less important ones it followed, the latter  had a smaller but similar journeys as well. 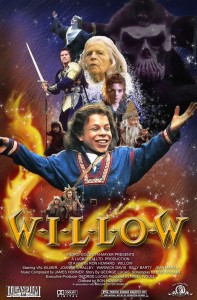 Here I am going to give a brief summary of scenes from the film that I believe follow the heroes journey rather well, though you should note I am summarizing. The movie starts with the journey of our catalyst character, a baby is sent floating down a river by a women who saved it from certain death. This is were Willow Ufgood’s, our main character, a farmer and a aspiring magician/sorcerer, children find the babe by the bank of the river by their home. After a seemingly random attack on the village by hounds looking for a baby, Willow is conscripted with several other of his people to return the baby to its “own kind”. It should be mentioned that Willow’s people are dwarfs, and the baby was human. Tasked with returning the baby to a responsible person of the baby’s own kind. Although reluctant to leave his family he feels somewhat responsible for the child and thus his “Call to Adventure has begun”.

The first encounter on their journey is with a man in a cage named MadMartigan is deemed to be a responsible person by everyone in the group who decide to head home, leaving Willow one other dwarf and the baby. Eventually with seemingly no other options they give the rogue the baby and head home, the whole time With Willow asking himself if they did the right thing.

After seeing that the baby had been taken from the human they left it with they decide to follow and retrieve it. This is where our hero gets supernatural aid, and is chosen as the protector of the baby. After affirming his belief that he is in fact responsible for the child, he lets his friend go home and continues with new knowledge about his quest and the baby that he protects. We also gain two new heroes, who now have little side journey’s of their own. This movie is interesting in this way, because as it progresses more heroes arise with transformations and challenges. At the end we end with six heroes all with different paths that cross, and we are at least somewhat aware of their background and motivations.

This movie and many other like it follow a similar pattern of the heroes journey albeit not the exact progression something very similar can be found in almost every film/story following a hero or heroes. I love this movie and am happy to have the chance to share it in this course.

I believe that current cinema has the ability to meet the human needs expressed in the four functions of mythology, although I believe that many fall short. Part of the problem with modern cinema is relation and interpretation, some may find that a film meets all of needs they have for a film, while others feel like it was missing something. Film as with most art is to be considered by the viewer. Most movies that follow an adventure will use a form of the functions maybe without even realizing it, because relation and mystery along with psychology are great hooks, they involve the viewer and make them attached to the characters on the screen.

I will say though that some of the movies today are just plain  gross, I miss the scary movie with nothing but a squirt of blood shown and the rest was imagination. And the thriller where you don’t see the antagonist till the very end and then find out his motives.