When I first read this assignment I was concerned. As the mother to pre-school age children I have not watched a “real’ adult movie in I don’t know how long.  After recovering from my momentary panic, I realized that many of the Disney and children’s movies I have recently watched use the hero’s journey pattern. The Lion King, Mulan, Aladdin, and even the Teenage Mutant Ninja Turtles all use the hero’s journey as a basic outline.

One of the Disney films that I believe did an excellent job following the hero’s journey pattern The Lion King. This movie contained many of the elements Joseph Campbell defined in his definition of a Hero’s Journey. Some of the elements may step outside the traditional pattern but in the end they all intertwine to make a cohesive hero’s journey that follows the pattern. I believe that the twists in the patterns keep people interested and thinking. One element that seems to be outside the tradition norm is the appearance of the mentor. Rafiki seems to fit this mold but I also see Timon and Pumba as mentors in Simba’s journey. They all guided him in his growth and learning about himself. 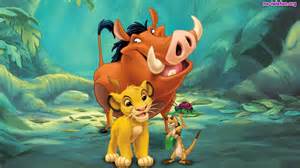 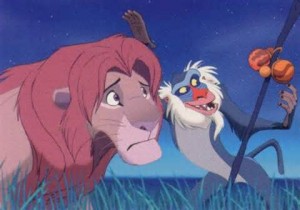 I almost thought the call to adventure was after Simba had grown up and was asked by Nala to return to help the pride. But, after some thought I believe that he was actually called upon to act like a future king by his father and he ignored this call to remain a carefree cub. His believe that he caused his father’s death and subsequent self-exile is typical of the belly of the whale where the hero is “swallowed into the unknown’. Confronting his father’s spirit and coming to terms with life and his place in it sets him on the path home with the ultimate boon-the fulfillment of his destiny, which is to be the  king of the pride.

Some current cinema meets our needs as based upon the four functions of mythology where others fall short. The first of the four functions is the mystical. There are movies that provide us the need to experience the mystery of our existence. The awe at what is. Another function is the need to know where about the universe and what our place is in it. This need is meet by some movies that explore creation and also test the limits of what is known of science and where this knowledge is going. Exploring these ideas can make up think about what part we play in our world and what the ramifications of our actions can be.

The third function of mythology is that of social function. Movies can promote what we see as right and wrong. The basic good versus evil movies help ingrain what behavior is acceptable in a society. Movies also help show us how we should behave and what we should be doing at various stages of life. Movies that are true to what original stories and myths were can provide us information that makes us think and helps us determine who we are, why we are, and what the appropriate behaviors are.. This all being said there are many movies out there that are simply entertainment and provide no basis for us to think and learn from. I think that there are so many movies and entertainment sources out there we have become numb to what the purpose of stories was originally for.